A lot of people know the common risks pregnant women should avoid: tobacco, alcohol, caffeine and sushi. But at an event hosted by Women for a Healthy Environment at the Hill House Association today, experts shed light on some little-known environmental risks that damage a child's development.

"We think it's very important to bring folks into our region to talk about environmental exposures related to healthy pregnancies and making folks more aware of where the exposures are and how make choices that are healthier and safer for their families and their communities," says Michelle Naccarati-Chapkis, WHE executive director. 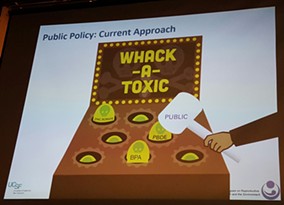 Marya Zlatnik says the country's current public policy approach to toxins is reactionary
Climate change was among the risks detailed by keynote speaker Marya Zlatnik, an obstetrician and gynecologist. While environmentalists are well aware of the risks to our planet, Zlatnik explained the effects climate change can have on a woman's reproductive health.

According to Zlatnik, preterm birth has been associated with extreme temperatures, a consequence of climate change.

"These are serious complications with pregnancy, so this is something that could really have an impact on the rate of maturity and other outcomes for babies," Zlatnik said. "This is pretty depressing information, and every time I give this talk I see the same not-very-happy faces in the audience. But I would argue there are things we can do to impact."

And while fracking for gas and oil is not as prevalent in Zlatnik's native California, she also detailed the dangers associated with that practice, which has become widespread in Pennsylvania. (Fracking involves using pressurized liquids to crack underground rock, releasing deposits of oil and natural gas.) There are 13 known suspected carcinogens involved in fracking, along with neurotoxins that can impact development. Researchers have also found an association between proximity to fracking wells and preterm birth and low birth weight.

But beyond these industrial toxins, Zlatnik also detailed toxins women should avoid in their daily lives. Advice included: buying organic, avoiding foods with substantial plastic contact, eating low-mercury fish, washing hands prior to eating, limiting pesticide and solvent use, and getting rid of old foam furniture that might contain flame retardants.

Zlatnik also advised steering clear of some dangers many aren't familiar with, like the carbonless receipts distributed at ATMs and in supermarkets. She also said women should be thoughtful about the body and beauty products they use.

Zlatnik adds there are cheaper alternatives to some things on her list. For instance, for pregnant women who cannot afford to buy organic, Zlatnik recommends avoiding foods known as the "dirty dozen" (apples, peaches, celery), which tend to contain the most pesticides, and instead eating fruits and vegetables known as the "clean 15" (asparagus, onions, pineapple), which tend to contain the least.

"I think many pregnant women don't hear about these things from their obstetrical-care providers because providers are worried about scaring them," Zlatnik says. "And we also feel like women are told to restrict so many things. Pretty soon pregnant women won't be able to eat anything. So I'm going to argue that the burden needs to be on society, and at the policy level, and the burden shouldn't be on the individual pregnant woman to figure out what's harmful and what to avoid."

As a testament to the ways in which public policy can help protect pregnant women, Zlatnik pointed to efforts that have been made to eliminate lead toys and Bisphenol-A in the plastic components in baby bottles. While BPA and lead were once widely used, after they were discovered to be dangerous, government intervention led to their diminished use.