Alison Weir, author of a new book about the U.S. role in the creation of Israel, speaks at the University of Pittsburgh tonight. 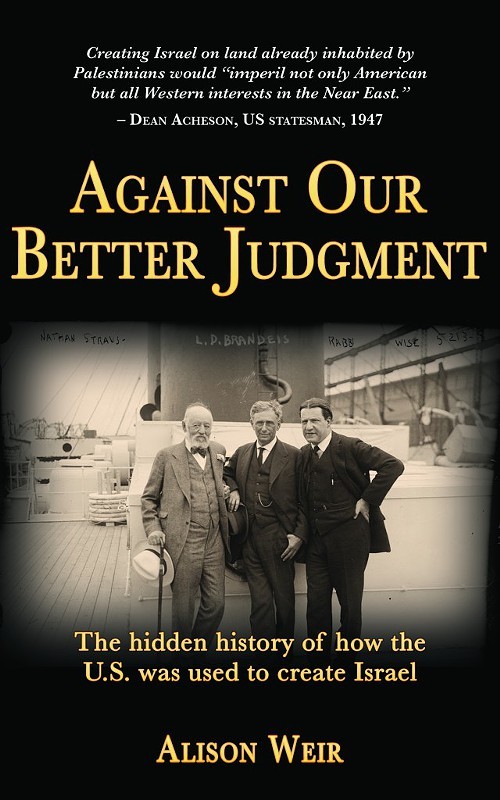 The book, Against our Better Judgment, is subtitled "The hidden history of how the U.S. was used to create Israel."

The talk is sponsored by Students for Justice in Palestine, at Pitt.

According to a press release, Weir's book "details how powerful politicians, businessmen, and lobby groups, some using covert means, succeeded in pushing the U.S. to support the creation of the state of Israel over the advice of top experts in the State Department, Pentagon, intelligence agencies and elsewhere."

The release continues: "Weir is executive director of If Americans Knew, a think tank that focuses on getting the facts about Israel-Palestine out to the American public. She appeared on C-SPAN earlier this year as a speaker at the 'National Summit to Reassess the U.S.-Israel Special Relationship.'

"Weir argues that if Americans knew the extent of U.S. support for Israel's decades-long abuses against Palestinians, they would work to put a stop to it, since U.S.taxpayers give Israel over $3.1 billion per year in military aid."

Weir's talk coincidentally occurs in the midst of controversy over Conflict Kitchen, an Oakland take-out restaurant whose current Palestinian menu has drawn criticism from groups including the Jewish Federation of Greater Pittsburgh. A death threat that caused Conflict Kitchen to close for a few days received international attention.

The free talk is at 8 p.m. tonight at William Pitt Union Dining Room B.

Tags: Alison Weir , University of Pittsburgh , Against Our Better Judgment , If Americans Only Knew , Students for Justice in Palestine , Image