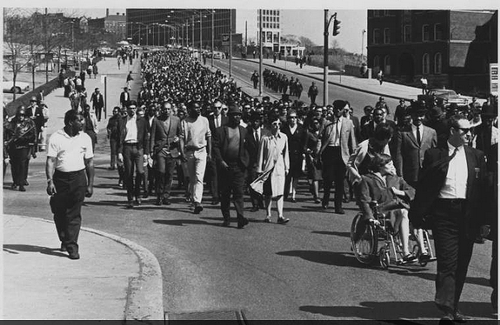 Pittsburgh's nonviolent response came as public reaction to King's assassination was marked by intense riots in dozens of major cities, including Chicago and Los Angeles.

Informed of the potential for the march to become violent, freelance photographer, Charles R. “Chuck” Martin — who then worked as a photographer for United Way — walked across the Sixth Street Bridge, from the North Side, to shoot photos of the rally.

“The only thing anyone was talking about that day was the assassination. It felt like such a significant moment in history and it needed to be documented,” says Martin, now 85.

Armed with a pocket full of film and two cameras around his neck, Martin took more than 120 photos, documenting the peaceful demonstration.

Now, 45 years later, Martin has donated his entire collection negatives and black-and-white photos to the University of Pittsburgh. And tomorrow, Pitt hosts "MLK Jr. Pittsburgh March: Through the Lens of Charles Martin," displaying Martin’s photographs from that day.

The event, held in the Dick Thornburgh Room of the Hillman Library, will feature talks from Michael Dabrishus, Pitt’s assistant University librarian; Laurence Glasco, a Pitt professor of history; and Martin himself.

"When we received the collection, we were just ecstatic,” McCormick-Ware said.

Martin says he donated his images to the university’s library because so much of his work was in Allegheny County, and it seemed natural to want to preserve his photos at Pitt.

Twelve of Martin’s photos from the April 7, 1968, march will be on display inside the library, on the ground floor, through summer. Friday’s event runs 10-11 a.m.

Martin says it is important to recognize the events of 1968 in honoring Pittsburgh’s civil-right history.

“One of the last photos in the set is a pair of clenched hands — one black, one white — and the sign for Centre Avenue in the background. How it ought to be.”