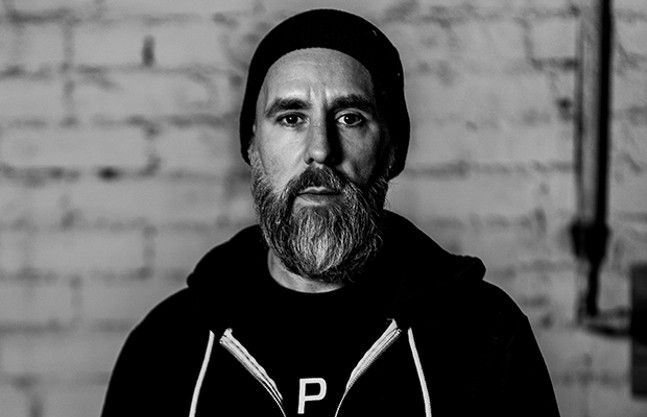 Photo courtesy of Benjamin Prisbylla
Jesse Novak, host of WYEP's The Roots & Rhythm Mix
Like your rock music with a good beat and the occasional twang? Turn your radio dial to 91.3FM on Sundays and try not to stomp your feet. It's nearly impossible to sit still. Don't believe me? I've been a fan for years:

my spiritual animal is @WYEP's sunday roots and rhythm show


The Roots & Rhythm Mix, airing from 11 a.m.-2 p.m. every Sunday on WYEP, is hosted by Jesse Novak, of Dormont. During the day, he's a strength and conditioning coach for the YMCA of Greater Pittsburgh. But for three hours once a week, he works his magic behind the mic on Pittsburgh's independent radio station, bringing hits from artists ranging from Tom Waits to Townes Van Zandt to Etta James.

This Sunday will be his eighth anniversary hosting the show, as we recently learned on Twitter:


July 29 will mark 8 years of me hosting WYEP's Roots and Rhythm Mix. I'm looking forward to planning a hell of a show. That's also 3 years longer than my marriage lasted so there's that too.


To help him celebrate, CP asked Novak eight music-related questions, one for each year of his show.

1. Do you remember the first song you played on air?
I wish that I knew. I’ve decided that when I hang up my radio boots once and for all that the final song I will play will be the live version of Ted Nugent’s "Wang Dang Sweet Poontang." (That’s a joke, by the way.)

2. Favorite band or musician?
There are so many that I could mention. I could geek out on questions like this all night. I’ll stick with roots-related artists and say Steve Earle, Bob Dylan, and Lucinda Williams.

4. Favorite local band or musician?
Because of my work, I get up so early that getting out to support live local music can become a challenge. I try to get out as often as I can, though. I’ll say that I definitely love Bindley Hardware Co., The Buckle Downs, Mixus Brothers, The Local, Killer of Sheep, Eel, Derketa, Taphos Nomos, Slim Forsythe, and the Cheats. There’s so much underrated talent in town.

5. Have any earworms you can't get rid of at the moment?
"Years," the new album by Sarah Shook and the Disarmers, is amazing. The new record by Brent Cobb is great too.

6. Favorite TV theme song?
It’s not much of a theme song per se, but Freaks and Geeks used Joan Jett’s "Bad Reputation." I loved that show.

7. Are there any artists that don't fit in with the Roots & Rhythm genre that you wish you could play on air?
No. The show is so diverse. It’s got country, blues, soul, world music, reggae, western swing, early rock 'n' roll, and more. There’s not room for much more. One of the show’s strengths is the diversity. You never know what you’ll hear next. I’ve done radio shows for long enough that, at one point or another, I’ve been able to play just about any artist and genre that I could ever have wanted.

8. Click shuffle on your music player. What five songs are at the top?
Buffalo Springfield's "For What It’s Worth"
Black Sabbath's "Into the Void"
Swans' "The Seer"
Return's "Goat-Disco Fever"
Ride's "Polar Bear"

Tune in this Sun., July 29 for his anniversary show where he'll be playing music "you might hear at a good party." Good luck sitting still as you listen.