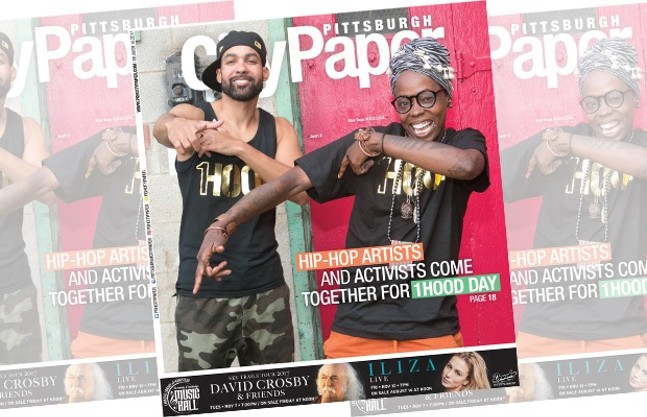 Blak Rapp Madusa, (right) on the cover of the Aug. 9, 2017 issue of City Paper
Wilkinsburg activist and hip-hop artist Blak Rapp Madusa (real name Melanie Carter) has been a key player in Pittsburgh's Black Lives Matter movement. She has participated in many protests, rallies and artistic fundraisers to uplift the region's black community. In 2017, Madusa performed at 1Hood Day, a festival to honor the city's hip-hop talent and to give a platform to the region's performer/activists.

Now the activist is getting a different form of attention.

Madusa was charged with disorderly conduct, resisting arrest, defiant trespassing and failure to disperse. Officer Christopher Kelly, of the North Versailles Police, was shown in one video to be throwing Madusa to the ground during the arrest, all while smoking a cigarette.

Mike Manko, spokesperson for Allegheny County District Attorney Steven Zappala, told the Pittsburgh Post-Gazette on March 10 that the arrest carried out by Kelly "does raise some concerns."

On March 16, supporters of Carter started a YouCaring crowd-funding campaign to raise money to pay for legal fees. The campaign is asking for $15,000, and so far $1,410 has been raised by 44 donations.

"Our sister and comrade Melanie Carter/ Blak Rapp Madusa needs our support now!" reads the YouCaring page. "She will need financial support for additional lawyer fees, transportation, therapy and a campaign to clear her name."

A request for comment to the email listed on Madusa's YouCaring page went unanswered.

The YouCaring page also suggests that supporters of the artist attend her magistrate court hearing on April 19, scheduled for 11 a.m. at the North Versailles Magistrate Court in North Versailles.