Protesters and North Hills constituents rally outside of Pennsylvania House Speaker Mike Turzai’s office, ask for a solution to balance the state budget 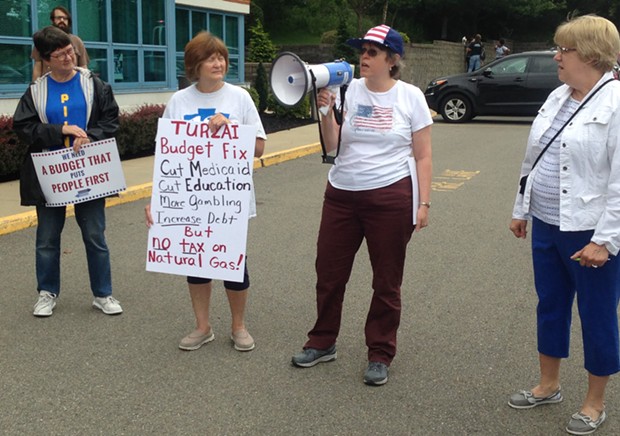 CP photo by Ryan Deto
North Hills constituents speaking out against state Rep. Mike Turzai at a July 25 rally
On July 22, Pennsylvania Speaker of the House Mike Turzai (R-Marshall) convened a rare weekend session with the Republican caucus of the Pennsylvania House of Representatives. Turzai tried to sell his proposal to fill this year’s $2 billion budget deficit, which he suggested the state do by borrowing $1.5 billion, and cutting subsidies to recycling, farmland-preservation and highway-beautification programs. But the 121 members of the Republican caucus, which holds a 39-seat majority over state House Democrats, rejected the idea.

Turzai, defeated, was then scheduled to travel to Atlanta to participate in a Republican Party campaign event, according to the Pittsburgh Post-Gazette. That didn’t sit well with some of his constituents and other Pennsylvanians.

About 40 protesters, including 10 constituents of Turzai’s 28th Pennsylvania House District, rallied outside the speaker’s office today where they called on Turzai to come up with a solution to balance the state’s $32 billion budget.

“We delivered a strong message to Turzai that he works for us,” said Linda Bishop of Pine. “He needs to be in Harrisburg to balance this budget.”

Gov. Tom Wolf, a Democrat, proposed a budget in February that works to close the state’s budget deficit, with spending reductions through consolidating state agencies; revenue-raising tools such as a severance tax on natural-gas drillers; and  imposing a $25 per person fee on towns that rely on state troopers, instead of their own police departments, to service their municipalities.

But with Republican majorities in both the state House and state Senate, both of which are reluctant to support any tax increases, Wolf decided to let the budget become law without his signature. It is now in the hands of either the House of Senate to find the funds to fill the budget.

At the rally today, Erin Kramer, director of statewide advocacy group One Pennsylvania, which support labor unions, environmentalism and other causes, was critical of Turzai, saying that his inability to find a budget solution will eventually put public schools, health care and child-care programs in jeopardy. Kramer cites Pennsylvania’s 2015 budget impasses — when some Pre-K programs were forced to temporarily close, among other closures — as evidence.

“This is not the first time Turzai has done this,” said Kramer citing Turzai’s role in the 2015 budget impasse. “He can’t even lead his own party right now.”

Bishop and the others at the rally were calling on Turzai to support “recurring sources” of revenue to support the state budget. Bishop said that she wants Turzai to back a severance tax on natural-gas drilling, or fracking.

Pennsylvania is the only large, natural-gas producing state not to have a severance tax on frackers, even though the state does impose an impact fee on them.

The Marcellus Shale Coalition sent a letter to Turzai on July 18 stating the coalition’s disappointment in some House Republicans, like Rep. Gene DiGirolamo (R-Bucks), who support a severance tax. It also noted that the state’s impact fee has raised substantial funds for the state: $1.2 billion since its inception in 2012. The letter says "Pennsylvania’s Impact Fee brought in more revenue in 2016 than the severance tax collections did in Ohio, West Virginia, Colorado and Arkansas combined."

However, a 2017 report from Moody’s Investors Service shows that while gas production has risen over the last three years, the impact-fee distributions to local governments have actually declined since 2014.

About 30 minutes into the rally and before it came to close, McCandless Police officers arrived and warned those in the crowd that if they had parked their cars in the neighboring Northland Public Library, they would be towed. This effectively killed the rally, as many in the crowd had parked in the Northland lot, since the lot in front of Tuzai’s office is relatively small and filled up quickly.

Interestingly, when CP talked to Northland Library director Amy Steele after the rally, she said the library did have concerns about parking given the library opened the same time as the rally, but added that no one at Northland called the McCandless police to tell them of non-library patrons parking in the lot. And there were still dozens of open spots in the parking lot when the police warned the rally-goers.

It has been reported that Turzai is considering challenging Wolf for governor in 2018, and Turzai himself already has a challenger for his house seat in nonprofit organizer Emily Skopov (D-Wexford).