Photo Courtesy of Wikimedia Commons
Congressman Tim Murphy (R-Upper St. Clair)
When President Barack Obama pardoned Chelsea Manning this week, a predictably polarizing media storm followed. Many on the left praised the president, while many on the right condemned him. Manning was convicted of espionage and theft charges in 2013 for her role in leaking classified U.S. military information to Wikileaks, however some believed her actions caused no real harm and she was merely acting as a whistle blower. Manning is a transgender woman who has been held in a men’s federal prison since her conviction and, according to her lawyer, has attempted to commit suicide twice while in prison.

“Three days before he leaves office, our Commander in Chief just set a tremendously dangerous precedent. Commuting the prison sentence of Bradley (Chelsea) Manning signals in no uncertain terms that protecting classified materials, military secrets and diplomatic documents is not a national priority," said Murphy in a statement. "In fact, his actions may have actually cost lives of those who help our nation in the fight against terrorism. Yet, one of the President’s final actions is to reward Manning’s treachery.”

And while Murphy is entitled to his opinion on governing and national security, it is how he addressed Manning that is upsetting the LGBT community. Murphy refers to Manning as “Bradley (Chelsea) Manning” twice in the press release and uses the male pronoun “his” when describing her.

Ted Martin, director of statewide LGBT-advocacy group Equality Pennsylvania, says Murphy should think harder about how he refers to transgender people and not “misgender them” because his profile can create a bad precedent for how his constituents should treat transgender individuals.

“It’s a really unfortunate choice of language for the congressman,” says Martin. “For people in his position, he should really think about how he refers to people in the transgender community. Some people can take the leap to treat other people with respect; it is not hard.”

A 2014 study by the American Foundation for Suicide Prevention found that 41 percent of transgender people attempt suicide, compared to 4.6 percent of the overall population. Transgender people report higher rates of bullying in schools and still face large stigmas from society overall.

Carly Atchison, press secretary for Murphy, offered a no comment to City Paper for this story.

Manning said in an article in The Guardian, that her first public appearance as a woman was in February 2010, and she said “I’d long known I was a woman” before that public appearance. Manning leaked documents in January 2010 and has served seven of her 35-year sentence (significantly longer than similar convictions in recent years). Manning will be released in May.

However, those looking closely at Murphy’s LGBT-related record would hardly be shocked that he would choose to use language insensitive to the LGBT community. Murphy voted against a federal bill to ban job discrimination based on sexual orientation; he voted for defining marriage between only a man and a woman; and he voted for a same-sex marriage ban.

On the first day of Donald Trump’s presidency, Pittsburgh Aquarian artists will gather for Aquapolypse Now! 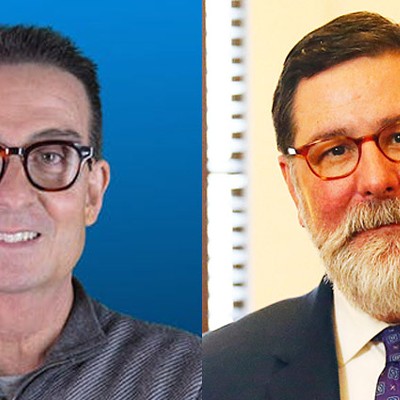 Presidential hopeful Andrew Yang wants to give voters $1,000 a month and save our jobs from robots