As part of an international day of solidarity with opponents of the Dakota Access Pipeline, a march and rally are planned Downtown tomorrow. 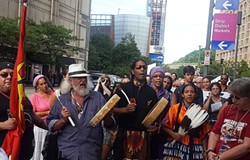 CP file photo by Rebecca Addison
Anti-Dakota Access Pipeline protest here in September
The event begins at 11 a.m. at Trinity Episcopal Cathedral, 328 Stanwix St., and will continue until 1 p.m. Some marchers will proceed to the David L. Lawrence Convention Center, while others will go to the Federal Building, which houses an office of the Army Corps of Engineers.

Marchers intend to show their solidarity with Native Americans and others seeking to prevent construction of the $3.8 billion, 1,172-mile pipeline, which would carry fracked crude oil from the shale fields of North Dakota to ports in Illinois. The route crosses traditional lands of the Standing Rock Sioux tribe, which says it threatens water quality and desecrates sacred lands.

Opponents add that anything that facilitates more burning of fossil fuels is also bad for the climate.

Opponents at the construction site, who call themselves “water protecters” rather than “protesters” — and some of whom have been camped there since spring — have been subject to harsh treatment at the hands of police, who’ve used tear gas, rubber bullets, sound cannons and more.

Dakota Access Pipeline opponents say their cause has become more urgent with the election of fossil-fuel advocate Donald Trump as president. They are calling on President Obama’s Army Corps of Engineers to deny the final permit needed to complete the pipeline, and say a timely decision could halt the project once and for all.

Tomorrow's event is organized by groups including the Thomas Merton Center, Pittsburgh 350 and Marcellus Protest.