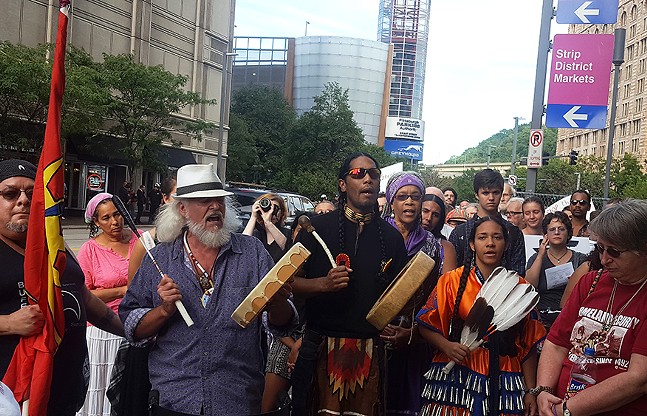 Photo by Rebecca Addison
A group closed out today's protest in song
Earlier today, hundreds of Pittsburgh-area activists blocked Liberty Avenue in Downtown Pittsburgh for nearly a half hour to protest the Dakota Access pipeline. According to protest organizers Three Rivers Rising Tide, a local environmental organization, the 1,170-mile-long pipeline poses a threat to indigenous communities.

"Today was an act of solidarity with the people of North Dakota, but it doesn't end there," said Eve Westheimer, of Three Rivers Rising Tide. The Pittsburgh protest joins street actions in cities across the U.S. and even globally.

For months, Native Americans and allies have been protesting the pipeline that originates in the Bakken oilfields of western North Dakota. The pipeline crosses the Standing Rock Sioux tribe's traditional hunting, fishing and burial territory and passes under the Missouri River, one of the tribe's water sources.

Among those camped out is Eagle Boy Coe, son of Johnny Coe, who spoke at today's rally Downtown.

"We thank all our brothers and sisters around the world — red, black, yellow and white," Johnny Coe said. "We've been fighting for this land and this water for a long time."

Estimates place more than 2,000 protesters at the Sacred Stone Camp near Cannon Ball, North Dakota. And in response, on Sept. 9, the U.S. Department of Justice and Department of the Interior announced they would temporarily stop construction while further research is done.

In fact, this past April, Pennsylvania was hit by a pipeline explosion in Westmoreland County that left one man injured. And just this month, it was revealed that four years ago, pipeline company Spectra Energy Corporation's inspectors had found corrosion on that pipeline.

"For almost 19 years I slept with that pipeline under my bedroom," said Casey Davis, a  Westmoreland County native who spoke at today's protest. "And four years ago, the pipeline showed abnormal tests."

Shandre Delaney, another of today's speakers, reflected on how the current struggle of indigenous people in North Dakota mirrors the struggle of local activists fighting for environmental justice in Pittsburgh.

"We should be concerned not only for today, but for many generations in the future," Delaney said. "We must fully recognize America is overrun with greedy capitalists who are willing to commit ecological suicide and take all of us with them.

Local activists are collecting supplies to send to those camped out in North Dakota.