"Bernie is a guy who has plans, has a proposal for jobs and education instead of more jails and incarceration," Greenfield told the crowd. "It's time that our country worked for regular people, people in the middle class who are having a harder and harder time."

After a short stump speech by both men, the crowd pushed to the front for sundaes made out of "Bernie's Yearning," the newish flavor Cohen created, and scooped by employees from the Ben & Jerry's location on nearby Penn Avenue. 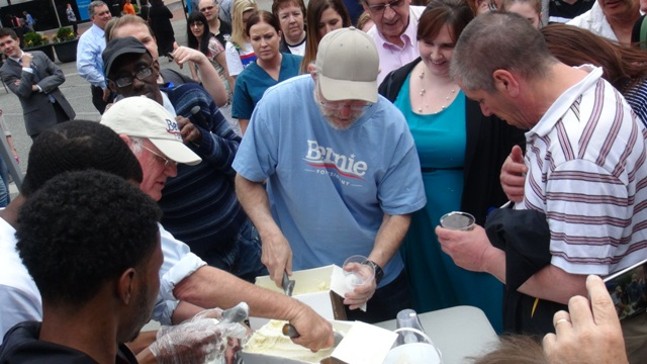 "It's essentially mint chocolate-chip ice cream, except somehow or other, all the chips have risen to  the top and congealed into one huge chocolate disc. And that represents all the money that's been generated since the end of the recession that's gone to the top 1 percent," Greenfield explained to the crowd. "The way you eat it is, you get that chocolate disc at top and you whack it with your spoon into a bunch of little pieces and then you mix it around and put the money back where it belongs before Wall Street skimmed it off."

Earlier this week while taking part in the "Democracy Awakens" protests in Washington, D.C., Cohen and Greenfield were arrested on the Capitol steps along with hundreds of others.

"The reason Jerry and I got arrested was to bring attention to the issue of money in politics and to advocate for laws and a constitutional amendment that would get money out of politics once and for all," Greenfield told City Paper. "No matter what problem you think about that's facing out country — the environment, the Wall Street banks or interests rates or access to education — the reason why we got these problems is because the people in office are working in the interest of the ultra-wealthy and the corporations, because that's who finances their campaigns."

The Pennsylvania primary is on Tue., April 26.