On Valentine’s Day, Pittsburgh joined cities around the world for a day of action to end gender-based violence, as part of the One Billion Been Rising for Justice campaign. 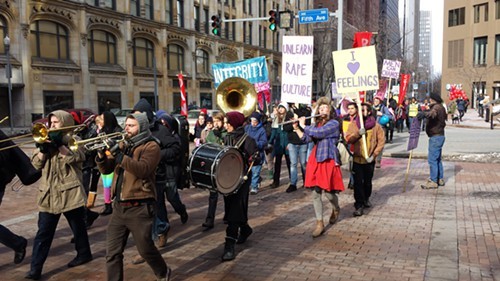 “We can end gender-based violence today,” said La’Tasha Mayes from New Voices Pittsburgh who helped organize the local event . “We have the power and the responsibility to do it. We can’t live in a world where violence is common for women and girls.”

The Feb. 14 event highlighted local and national cases of domestic violence including the death of Ka’Sandra Wade, a Pittsburgh woman murdered in 2013; and Marissa Alexander, a Florida woman facing 20 years in prison for firing what supporters say was a warning shot to ward off Alexander’s abusive husband.

For more information on the One Billion Been Rising for Justice movement, visit www.onebillionrising .org and follow #1billionrising on Twitter.