The giant floating yellow rubber duck that's coming to Pittsburgh in a couple of weeks is meant to make everyone happy. But a dispute over who can capitalize on the duck's image is already ruffling feathers.

Yesterday, the Pittsburgh Cultural Trust sent an email to local artist Joe Wos, demanding that Wos "cease and desist" from producing and selling T-shirts bearing a drawing of the duck and the phrase "Quack N 'At." 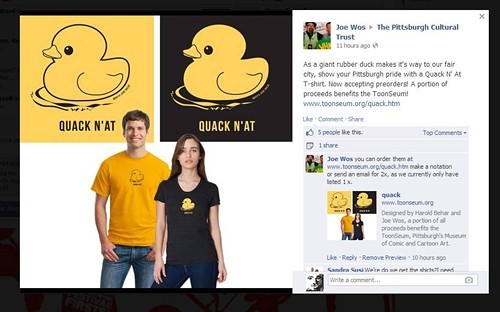 The letter, signed by Trust vice-president Marc L. Fleming, asserted that Wos' T-shirts would compromise "the brand of the Rubber Duck" and damage the interests of both the Trust and Dutch artist Florentijn Hoffman, who created the artwork.

The Rubber Duck Project is the signature element of the Trust’s Pittsburgh International Festival of Firsts, set to begin Sept. 27, with the duck's arrival Downtown via river. The Trust, the region's largest arts presenter, plans to sell its own duck-themed wares.

In a statement posted today on its Facebook page, the Trust said, "As a responsible arts presenter, we are committed to maintaining the integrity of the artist's work and all images affiliated with this public art installation. The Pittsburgh Cultural Trust will make official commemorative merchandise available for purchase."

Wos, however, says he will continue taking pre-orders
for his shirts for $17 each. Wos said that within 20 minutes of posting the T-shirt on his Facebook page, on Wednesday, he had received 20 orders.

"For me this is about artistic expression and free enterprise," he told CP in a phone interview this morning. "As a cartoonist, I can parody whatever I want.”

With characteristic puckish humor, Wos added, "I'm assuming all ducks flying south will have to be rerouted, because they’re not allowed in Pittsburgh at this time."

Wos is a veteran artist best known today as executive director of The Toonseum, Downtown’s museum of cartoon art and a mainstay of Cultural Trust-sponsored gallery crawls. Although the T-shirts are a Wos undertaking, not a Toonseum project, a portion of T-shirt sales are to benefit the museum.

Ironically, Wos says, The Toonseum is planning an exhibit on the history of the rubber duck (which dates to the 1800s). The show is set to open Sept. 27 — the very day the duck is to arrive Downtown. And The Toonseum is scheduled to have a booth on the Sixth Street Bridge, where there'll be an opening-night Festival of Firsts party, partly to welcome Hofman's duck.

Wos added that the Toonseum is among the city’s "fiercest protectors" of copyright. Yet, he says, "We simply do not view [the rubber duck] as a copyright issue. ... This is a figure that has long been in the public domain as a universal symbol — which is probably why [Hofman] used it."

Meanwhile, Wos says he is "very concerned" that continuing to sell the shirts will affect his, and the Toonseum's, relationship with the Trust. "It's taking a stand that could have some pretty serious repercussions," he says.

However, Trust spokesperson Shaunda Miles told CP today that the Trust "has no intention of participating in any legal action” related to Wos' T-shirts.

Asked whether the episode might affect the Trust's relationship with Wos or the Toonseum, Miles said, "We hope not. ... We want to see more people Downtown more often. The Toonseum is part of that."

Though the Festival of Firsts marks the first appearance in North American of Hofman's duck, the duck has been tangled up in copyright issues before.

Hofman launched the Rubber Duck project in 2007, and the oversized waterfowl (actually, a different duck custom-built for each site) has since drawn huge crowds in cities worldwide, from Sao Paolo to Sydney. After the duck appeared in Hong Kong, according to press reports, knock-off imitations began appearing in various Chinese cities. Hofman was upset, telling the Wall Street Journal, "If people want the real duck, they have to come to me."

Earlier today CPsent Hofman an email via his website requesting comment. Hofman had not replied by press time.

Nor is Wos' case the first in Pittsburgh to draw the Trust’s attention. Miles says the Trust has spoken to "too many organizations to name" to ask that they not sell duck merchandise.

As one example, Miles cited tourism group Visit Pittsburgh. Reached by phone, Visit Pittsburgh spokesperson Connie George said today that the group did begin selling generic duck-themed merchandise last week — a rubber-duck beach ball, a rubber duck in a pirate hat. But following a meeting with the Trust about a month ago, Visit Pittsburgh agreed that it would stop selling its "unlicensed" merchandise once the licensed duck merchandise arrives, probably next week, George says.

Copyright issues around a work of art like Hofman's duck might appear tricky — particularly because, according to press reports, Hofman himself has said he simply copied, and enlarged, a duck design by the Hong Kong-based Tolo Toys.

But Mike Madison, a University of Pittsburgh law professor who specializes in intellectual-property law, says that even though he copied someone else's design, Hofman can hold a copyright on the duck. The enlargement of the duck makes it art, Madison tells CP via email. (By contrast, says Madison, the Trust has no legal standing in Wos' use of the image, because it cannot hold a copyright on Hofman's work.) Hofman's usage echoes the work of Pop Artist like Andy Warhol and Roy Lichtenstein, who appropriated comic strips or consumer products — Campbell's Soup cans, Brillo boxes — for their own ends.

But Wos says his defiance isn't a comment on the Cultural Trust per se.

"I think they've dona great job. I think they’ve saved this city in many ways," he says, referring to the redevelopment efforts of the group, which has major real-estate holdings Downtown, including cultural venues like the Byham Theater and Wood Street Galleries. But, he says, "They're wrong about this."

"It's a big rubber duck. Have a sense of humor."