Mel Barrett took off his muddy boots, lit a cigarette and plopped onto his blue tarp. At the corner of his home for the night in Mellon Green was a white posterboard with black lettering: American Dream My Ass.

The poster, Barrett says, is pretty representative of his life experience so far. He grew up "macaroni-and-cheese poor" and now, at 23, has moved back at home with his mother whose recently been disabled. They live off of food stamps. He's looking for work, but can't find any. "I'm afraid to go school. I don't know if I can accrue that kind of debt. I've already got a lot of medical bills," he says.

Barrett wants to improve his skill set: he used to work as a dishwasher at Olive Garden for around $9 hour with no health benefits at nearly 60 hours a week. "Yeah, there are jobs. But the fact that you have to have a job to survive and the [employers] know that and they hold it against you," by overworking employees, he says.

Barrett's dream job is to work in human services, and to help prevent some of the disparities that Occupy Pittsburgh, along with similar movements across the country, is trying to fight against by occupying public places like Mellon Green.

As Barrett puffs on his cigarette, his counterpart for the evening, Kaden Sylvers, sits beside him. The two met up just today, and are sharing a tarp. Another camper walks up and informs them someone just donated a sleeping bag and pile of gloves and hats. "Does anyone need a sleeping bag?" Sylvers raises a hand, and gets the bag.

That was the message after the earlier General Assembly, when the 200-some protestors came to consensus on their action plan for the next few days. As they departed, there were two clear messages: Take care of each other, and take care of the space. 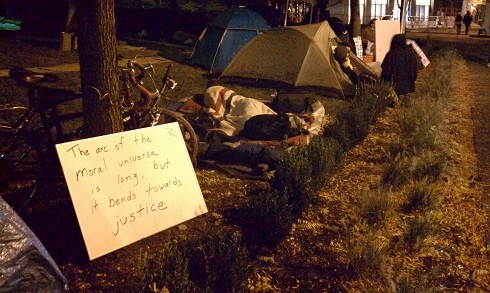 Photo by Lauren Daley
The message at the campsite

Throughout the Mellon Bank-owned property, a path made out of cardboard boxes and duct tape has been laid over what was once soggy mud. Every few feet are bottles and jugs of water for anyone who needs them. Tonight, the working group for food provided hot lasagna, sausage, hummus and bread. As campers milled about in their tents -- about 40 tents/tarps/encampment sites had sprung up by 11 p.m. -- a steady crowd remained on the corner of Grant Street and Sixth. They chanted everything from "Occupy!" to "I love you!" to passing Penguins fans.

As the Penguins fans dispersed through the crowds, one man boo'ed continuously for a few minutes. Another woman yelled "go get a job" as her male counterpart put his hand over her mouth and moved her through the crowd.

"You should consider yourself lucky you get to go to a hockey game on a Saturday night," Barrett says when asked about such banter. "It's a catchphrase, isn't it? Every time someone protests, it's 'Go get a job you bum.' I do want a job. I'd love to work."

But it was a small number of Pens fans that hassled the group. Others yelled in support, and countless vehicles -- still going strong at 11:30 p.m. -- honked in support.

While a crowd of 30 maintained a constant vigil on the street corner, other pockets formed within the green. Some played the guitar and fiddle. A call went out to play "duck, duck goose."

Even as the chants and rallies wound down for the day, campers didn't forget why they were there under the shadows of the BNY Mellon and UPMC logos on the skyscrapers that towered above them. "For me, I believe less government is better government," says a camper who asked to be identified only as Brian. "Think about how much charity has come out of this" he says as he holds up a foil plate of lasagna and sausage from the food table. "We've robbed America of philanthropy through the economy."

For others, like Barrett, it was a chance to show the public that a lot of people "are only one paycheck away from this." And he says movements like Occupy give him hope for what he considers very simple dreams.

"I'd love to own my own place, go to work, come home and crack open a beer and be left alone, instead of worrying about the end of the month or where the food is going to come from," he says. "I don't mind being poor. It's just tiring."