Protesters at the Occupy Pittsburgh camp site awoke this morning somewhat weary from a rough night's sleep, but in good spirits about the success of their first overnight occupation -- and the generosity of the movement's supporters.

Despite chilly temperatures and howling winds -- "The ground was a little hard, and it was a little cold," said Jon Smuck, 56, of Steubenville, OH -- occupiers said the discomfort was tolerable. But some had it worse than others.

"I woke up in the middle of the night when I felt paws on my forehead," said Jeff Cech, 28, of Greenfield, who slept tent-less on a tarp. "A rat was on my face."

Apparently, the rat was lured by a sticky bun Cech's friend had dropped off last night. But despite the rude awakening, Cech said, the occupation has been "definitely worth it."

Of the roughly 100 protesters milling around Mellon Green this morning, most sounded excited, if a bit groggy, about how the occupation has gone so far. Some gathered in small groups to discuss social and economic issues over coffee; others sat quietly, reading on sleeping bags. A few roamed the park to clean up trash. (Though the lawn was muddy, the area was already very clean.)

"Last night was wonderful," said Kelsi Randall, a 22-year-old art student at Slippery Rock University. She was particularly happy about the dialogue she and other protesters had with people walking past Mellon Green. "We had constructive conversations."

Even more positive news: There were reports -- which we have yet to independently confirm -- that the AFL-CIO will be helping to set up port-o-lets at the site. Campers have previously been using the facilities at Downtown businesses, or have been given access to the offices of unions and other sympathizers.

What about the police?

"They were honking and giving us thumbs up," she said. "It was pretty awesome. They were really nice." (Protesters said they didn't notice any police stay overnight. And none could be seen at the park this morning.)

"Everyone's super-positive right now," Cech said. "We have free food coming in all the time. It's becoming a close-knit community. A lot of people are stopping by and offering support."

Sipping on a cup of coffee and eating a hard-boiled egg at 10 a.m., occupier Silas Russell said he heard about a supporter last night who pulled up in his car, got out and literally gave a protester the coat off his back. "He said he supported what we were doing," said Russell, 27, of Mount Washington.

Since the occupation began at 4 p.m. yesterday, protesters said they've been overwhelmed by the support they've received from passers-by, not to mention from supporters following the occupation through social media. A designated food tent this morning included treats such as bagels, cookies, coffee and plenty of water.

David Meieran, a member of the media group, said they are constantly updating a list of needs on Occupy Pittsburgh's Facebook page. Chief among them, he said, is electricity. He said activists are struggling to run their media center and they could use a generator.

At noon, roughly 75 occupiers gathered at the center of Mellon Green for a General Assembly, the decision-making body of the occupy movement. 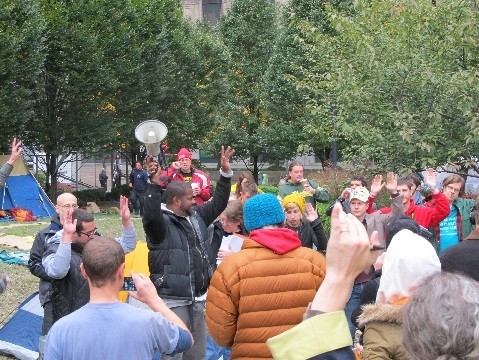 Among the issues/actions discussed at the hour-long meeting:

As the meeting ended, there were signs of an impromptu partnership between occupiers and Bank of New York Mellon, which owns the parklet. Mellon workers arrived at the park with stacks of straw to help reduce the damage done to the grass by the heavy foot traffic. 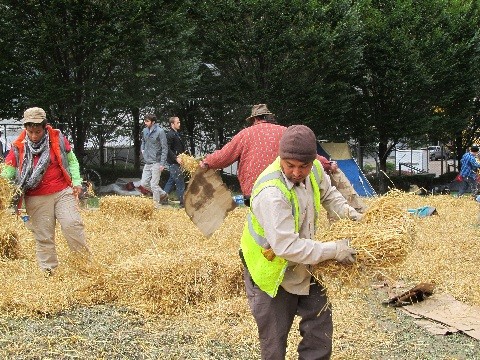 "The hay is here!" shouted Calvin Skinner, one of the meeting facilitators.

With that, dozens of occupiers began grabbing piles of hay and spreading it around the lawn.