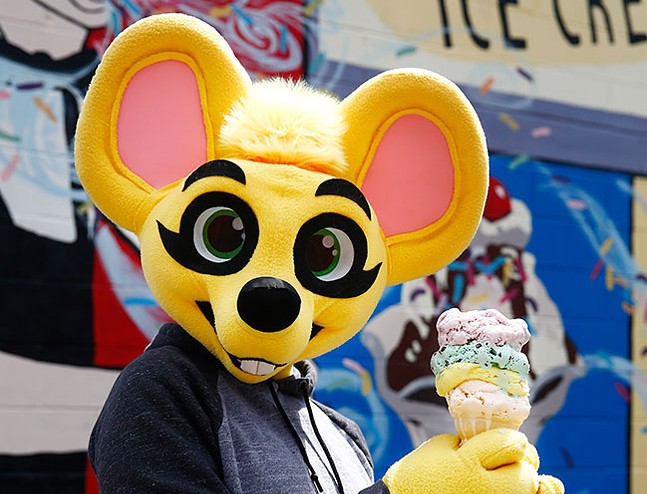 We decided to combine one of the city’s most anticipated events with some of the best summer treats in town and invite a local furry to pose as our cover model in honor of Anthrocon, the annual furry convention coming to town this week.

April, a 25-year-old from Carnegie, answered our call to bravely pose in her yellow mouse fursuit while holding an ice cream cone outside Klavon’s Ice Cream Parlor in the Strip District during a hot June weekend.

Tell me about your fursona.

Rhythm is a happy, yellow mouse who loves to groove! I usually carry around a speaker in my backpack and play electronic dance music, and I love to dance while wearing her! I designed Rhythm to reflect myself — someone who’s small, bubbly, and loves music as much as I do.

What's your favorite part about the convention?

Who made your fursuit?

How long have you been a furry?

I’ve been a furry for six years. I discovered furries through a friend when I was in college. I thought furries were a little unusual at first, but my friend told me to come down to Anthrocon and give it a chance, so I did, and I loved it! I love the artwork and costume creation so much. Plus, I’ve met so many awesome people through this community through the years, and I’ve made lifelong friends.

Do you dress up year-round or just during Anthrocon?

Year-round! We have a lot of local Pittsburgh furry events where we all get together and hang out. Some of us dress up in fursuits and some [don't]. Sometimes I’ll wear my fursuit, but most of the time I’ll just go as a person and hang out with my friends. We have a monthly meetup at the Mount Lebanon AMF bowling alley where we sometimes have more than 30 fursuiters and more than 100 people! We also have a not-as-well-known, local furry convention called WPAFW (Western PA Furry Weekend) in autumn where we’ll all get together in North Park, with an attendance of more than 300 people. It’s awesome to be a furry in Pittsburgh!

What do you wish more people in Pittsburgh knew about furries?

Cookies and cream! Or if it’s available, Cinnamon Bun. Yum!

How much do you know about the Fourth of July?