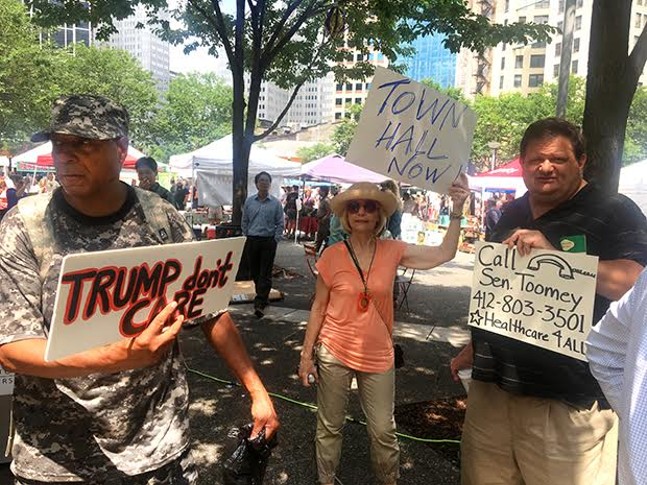 CP photo by Haley Frederick
Pittsburghers gathered in Market Square
The U.S. Senate will reconvene on July 10 after a weeklong Fourth of July recess that began on July 3. Many legislators use this time away from Washington, D.C., to meet with their constituents, but according to the Pennsylvania Health Access Network, Sen. Pat Toomey (R-Pa.) and nearly every member of Pennsylvania’s Congressional delegation have not planned any town halls or public forums during this time.

Toomey is a part of the group of 13 Republican senators who have been crafting legislation to repeal and replace the Affordable Care Act. Earlier today, local activists gathered in Market Square to share their objections to health-care repeal bills.

“This is recess week, which traditionally representatives use to hear from the people that pay their salaries. That’s not happening anymore, so that’s why we wanted to take to the streets and give people a chance to share their concerns about the repeal bills,” said Erin Ninehouser, community health organizer for the Pennsylvania Health Access Network.

Last month, Senate Republicans released a draft of the Better Care Reconciliation Act, created to repeal and replace the ACA. Frustration is growing as constituents feel unheard by Toomey, because of his failure to hold public town halls on the legislation. Toomey did hold a televised town hall last night on ABC27 News, but was heavily criticized that the event was invitation-only.

Rev. Sally Jo Snyder, who spoke at today’s event Downtown, has been a part of the United Methodist Church for 25 years. “I’m not one to throw out the word immoral. I have said the word immoral more in the last two weeks to a month, than I have in my entire life,” Snyder said. “What is being presented is immoral. When you will take away from the most volatile members of our society to give the wealthiest of our society a tax cut, it’s wrong. It’s immoral and it must be fought against.”

The Congressional Budget Office (CBO) reports that if the BCRA is enacted, 22 million Americans would lose coverage over the next 10 years. The BCRA would repeal some ACA mandated taxes on corporations and the wealthy. The CBO estimates that over 10 years, the BCRA would result in about $563 billion in tax cuts. 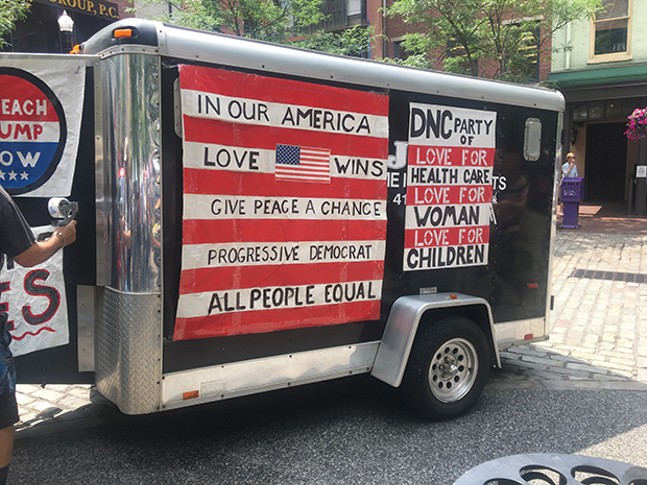 CP Photo by Haley Frederick
Friends Lauren Guzowski and Michaela Snider, a rising high school junior and a recent high school graduate respectively, came to today’s event to send the message that young people care about health care, too. “Millennials are always called lazy in the news. We are not — we are ready to fight,” Snider said.

Another speaker, Terry Peters, became passionate about health-care reform after her husband was diagnosed with two kinds of cancer, and she was then diagnosed with bladder cancer. Her family struggled to get their health insurance to cover all of their treatments before the ACA.

“We need a town hall, not a fake social-media event passed off as a fake town hall,” said Peters, who is a retired nurse. “I’ve texted, I’ve done everything for Toomey — Tuesdays with Toomey, I’ve written, I’ve called — no response. It’s like, ‘Sorry constituents, you’re on your own.’”

After the noon event ended, Ninehouser said the group planned to collect petition signatures until 4 p.m. before reforming for a rally in front of Toomey’s Grant Street office.