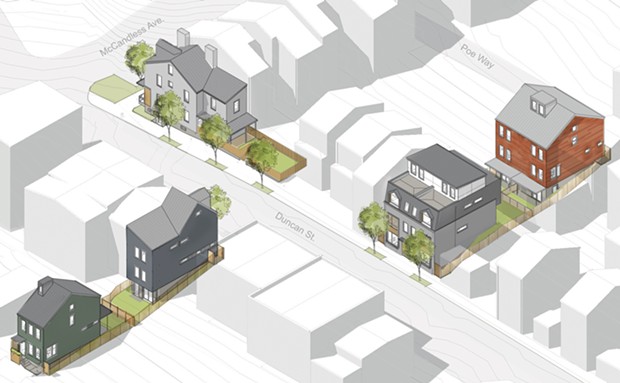 Image courtesy of Lawrenceville Corporation
Mock-up of Upper Lawrenceville's Community Land Trust
Pittsburgh’s Lawrenceville neighborhood has one of the hottest and fastest-growing housing markets in the region. A few years ago, houses typically sold for less than $100,000, but now some properties have reached prices of more than $500,000. According to the nonprofit community developers at the Lawrenceville Corporation, the percentage of property sales $250,000 and above has doubled since 2012.

As a response to this exploding market, the Lawrenceville Corporation knew it needed to do something bold. As City Paper reported in January 2016, Lawrenceville Corporation created the region’s first Community Land Trust (CLT), hoping to sell homes to low-income residents and to combat the neighborhood’s affordable-housing struggles. And last month, the group broke ground on its seven-property CLT.

“This is a direct and catalytic response by the Lawrenceville Corporation and our partners to the issue of housing insecurity. The neighborhood, through the award-winning Upper Lawrenceville Vision Plan, set 'housing for all' as a priority. … We are excited to be taking one more step in our disruptive, innovative approach to create housing that is permanently affordable,” said Lawrenceville Corporation director Matt Galluzzo in a press release.

CLTs maintain permanent affordability for the properties by having an entity (in this case, Lawrenceville Corporation) retain ownership of the land, but sell the homes to qualifying residents who earn 80 percent or less of the area’s average income — about $55,000 for a family of four. The homes in the Lawrenceville CLT will be sold for between $125,000 to $140,000 and will be constructed new or will be remodels.

Ed Nusser, of Lawrenceville Corporation, said in 2016 that CLTs allow homeowners to grow a limited amount of equity, but leaves them unable to sell the property to the highest bidder. Instead, Lawrenceville Corporation will manage the sale of the property to another low-income buyer. Nusser said that land-trust homeowners can make alterations to their properties and will otherwise have all the freedoms of a typical homeowner.

The properties will be located in upper Lawrenceville, near the corner of McCandless Avenue and Duncan Street. The CLT was funded by a variety of private and public entities, including Pittsburgh’s Urban Redevelopment Authority. Pittsburgh Mayor Bill Peduto has been supportive of the initiative.

“As a 21st-century city, we must have innovative out-of-the-box solutions to 21st-century issues. The City is proud to support Lawrenceville Corporation's CLT initiative­ — a direct implementation of the City's Affordable Housing Task Force recommendations with clear alignment with our p4 Performance Measures,” said Peduto spokesperson Katie O’Malley in a press release.