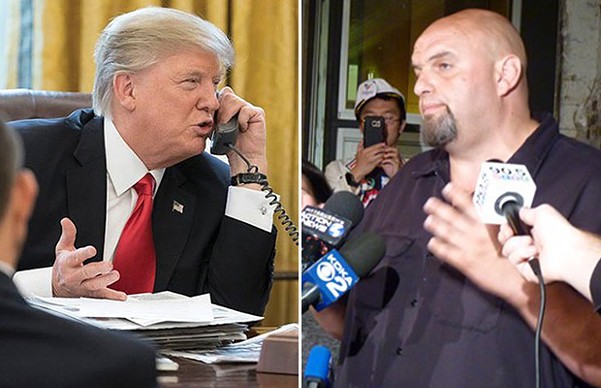 White House press photo/CP photo by Ryan Deto
President Donald Trump (left) and Braddock Mayor John Fetterman (right)
On June 1, President Donald Trump announced the U.S. was leaving the 2015 Paris Climate Accords, an international agreement to reduce global carbon emissions. This was already enough to throw progressives into a tizzy, but when Trump said in his speech that “I was elected to serve the people of Pittsburgh, not Paris,” many Pittsburgh Democrats, and other prominent liberals across the country, lost their collective shit.

Pittsburgh Mayor Bill Peduto pointed out that Pittsburgh voters chose Hillary Clinton, with her receiving 80 percent of the city’s vote, and he later spoke to multiple cable-TV news outlets about how the city has been working for decades to clean up the environment and shed its polluted Rust Belt reputation. And many stories during the national news cycle over the last 24 hours have discussed how wrong Trump was in using Pittsburgh to justify leaving the Paris agreement.

But, according to Braddock Mayor John Fetterman, who has been campaigning for regional Democrats since last year, progressives shouldn’t be so shocked. He believes Trump isn’t actually focused on ruining the environment and points out that the rules of the Paris agreement are voluntary and wouldn’t have gone into effect until 2020. Fetterman believes Trump’s announcement is a campaign strategy.

“It is a win, win, win for Trump,” says Fetterman. “He gets to stoke his base, he gets to grab the headlines away from Russia, and it doesn't get him any more votes if he stayed in the agreement.”

Fetterman says Trump is aiming to maintain his small margin of victory in Rust Belt states like Pennsylvania, so come 2020, he will keep the presidency. (Trump's electoral-college victory was thanks to winning Wisconsin, Michigan and Pennsylvania by a combined 77,000 votes.) Fetterman argues that by focusing on the what, instead of the why, of Trump’s Paris decision, Democrats are falling into Trump’s hands as a perpetual and effective campaigner.

“I think that is clear, I am shocked that that is not clear,” says Fetterman, on the idea that Trump is repeating his campaign strategies of 2016. “Why is everyone taking the bait? He knows he is not going to get any votes out of it, it is all to attribute to his base. ... When the magician is doing the trick, don't focus on the trick. He is deceiving you.”

And Trump’s announcement seems to be aligned with the efforts of regional Republican politicians.

On April 24, U.S. Congressman Keith Rothfus (R-Sewickley) gave President Trump credit for Corsa Coal Company adding 70 mining jobs to its Acosta mine in Somerset County. “The day President Trump signed legislation overturning one of President Obama's anti-coal rules, Corsa Coal in Somerset County announced it would open a new coal mine with at least 70 new middle-class jobs,” wrote Rothfus in a Facebook post. This sentiment was echoed by Corsa CEO George Dethlefsen in the media outlets of Somerset, Cambria and Bedford counties.

“Further, while the current agreement effectively blocks the development of clean coal in America,” said Trump in his June 1 speech about leaving the Paris agreement, “which it does and the mines are starting to open up, we’re having a big opening in two weeks, Pennsylvania, Ohio, West Virginia, so many places. A big opening of a big new mine, it’s unheard of. For many many years, that hasn’t happened.”

Many media outlets have reported Trump was referencing the Corsa mine in Somerset County in his speech. But what Trump didn't mention is that Corsa is merely adding some jobs back that it had lost. In 2015, Corsa cut 130 jobs and blamed a “depressed global market” as the reason for cutbacks, not Obama-era regulations, according to TribLive. Additionally, Corsa CEO Dethlefsen told Reuters in April 2017 that Corsa has seen more demand for coal in the first half of 2017 thanks to more requests from Asia. The Reuters story also quoted Luke Popovich, a spokesperson for the National Mining Association trade group, who said it wasn't clear the increased coal demand had any link to Trump's administration's push to cut regulations.

Fetterman still notes the decision to pull out of the Paris agreement is a fairly deft bit of messaging by Trump.

“Trump showed his base that he cares about them, and that counts for a lot,” says Fetterman. "It might be an empty gesture, but it counts for something. … People don’t remember how much Trump changed things. He is now the champion of the coal miner and steel worker. It is a remarkable reversal, and it was the path no one else saw.”

Somerset County voted for Trump with more than 76 percent of the vote, the highest percentage of any Pennsylvania County with more than 50,000 residents. And further to Fetterman's point, Trump announced on June 2, that his campaign is holding a “Pittsburgh, not Paris” rally in Washington, D.C., on June 3. The rally's invitation says the rally is to "demonstrate our support for President Trump and his fearless leadership."

Fetterman says progressives need to better organize messaging in response to Trump, not just go nuts when the president does something dramatic. He says Democrats should be coming up with strategies to try to win back some of the Obama-Trump voters in working-class areas.

“I care less about the progressive reaction, and more about what Trump is trying to do,” says Fetterman. "It has everything to do with the electoral map of 2020. Are we going to say screw Trump voters, or try to earn their trust back? It is wrong to say 'eff Trump voters.' If you voted for Barack Obama, you are not a lost cause.”