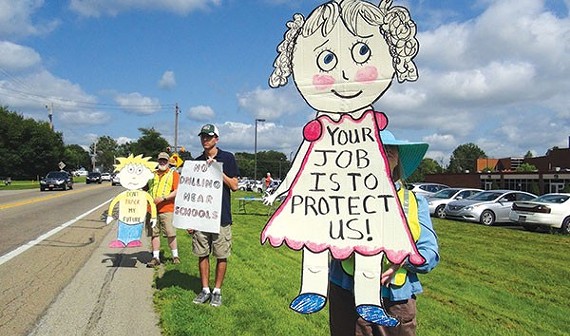 On Sept. 28, in the state Supreme Court case of Robinson Township v. Commonwealth, judges struck down many provisions of Pennsylvania’s oil and gas law, Act 13. The law passed in 2012, during Gov. Tom Corbett’s administration, and established regulations and zoning rules on natural-gas drilling. But some rules drew ire from environmentalists, and the recent state Supreme Court ruling addresses some of them.

Drillers are no longer permitted to use eminent domain to seize private, subsurface land for storage of natural gas; private wells must now disclose hazardous spills; and doctors are now allowed to inform patients of side effects associated with fracking sites, overturning the "doctor gag order."

“The Supreme Court’s ruling will restore to all Pennsylvanians the power to regulate natural gas fracking in their own communities as they see fit,” wrote state Sen. Daylin Leach (D-Montgomery County) in a press release. “It lifts the senseless and unconstitutional restriction on physicians that barred them from discussing how proprietary fracking chemicals may be affecting patients’ health.”

Before the court decision, frackers didn’t have to disclose all the chemicals they used in their drilling process (chemicals that could make their way into groundwater). Doctors could gain access to a list of the chemicals only if they signed a confidentiality agreement preventing them from telling their patients. Fracking companies claimed that revealing all the chemicals would tip off competitors to their methods.

This led politicians including Leach to promote bills that would force frackers to publicly disclose all their chemicals. But those efforts were held up in committee, and never saw votes. State Rep. Dan Frankel (D-Squirrel Hill) was among those who attempted to pass such legislation. He praised the court’s ruling in a statement made on Sept. 28.

"The Pennsylvania Supreme Court has protected patients and doctors by striking down the gag rule in Act 13,” wrote Frankel. "Patients trust that their doctor is telling them the truth, the whole truth, and that their health is the doctor’s primary concern. We should protect that trust.”

The fracking industry was not as thrilled with the decision.

“We’re disappointed in aspects of the court’s ruling,” wrote David Spigelmyer, president of the Marcellus Shale Coalition, in a Sept. 28 statement. “[It] will make investing and growing jobs in the Commonwealth more — not less — difficult without realizing any environmental or public safety benefits.”