Ai Weiwei speaks in Pittsburgh on eve of Warhol exhibit 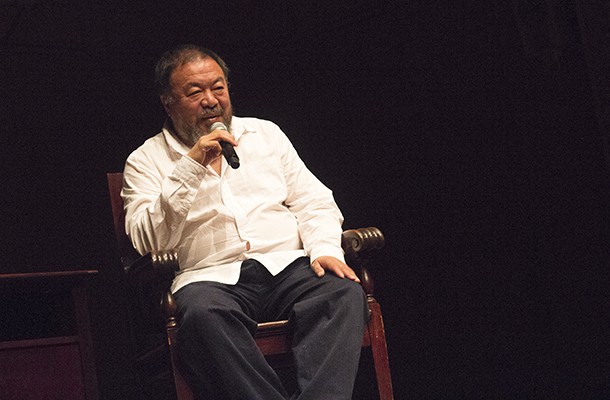 The talk, hosted by Andy Warhol Museum executive director Eric Shiner, served as kick-off for today's opening of Andy Warhol | Ai Weiwei, an exhibit juxtaposing the two artists' lives and works. The exhibit comes to Pittsburgh from the National Gallery of Victoria in Melbourne, Australia.

Ai has spoken out against authoritarianism in China. His arrest in 2011 in China, for what the Communist government said were financial crimes, was criticized as politically motivated. Ai's passport was confiscated for four years.  In 2014, working from China, he directed an exhibit at Alcatraz, where portraits of "prisoners of conscience," including Edward Snowden, created from Legos, were on display, and music of the Russian band Pussy Riot played.


With such a iconic presence in the room, one might expect high-brow intellectualism and somber discussion. But Ai brought a down-to-earth, warm presence and sense of humor. He kept the audience laughing, delivering one-liners to Shiner's lighthearted questions. In response to Shiner's inquiry about the many cats at his Beijing studio (which Shiner compared to Warhol's affection for cats), Ai said, "We all have our weak points." Asked what Warhol would have thought of his work, Ai speculated, "He'd say, 'geez, that's great."

The crowd enjoyed a particularly amusing moment when Shiner brought up Ai's Lego episode leading up to the Melbourne show — in which the company would not fill his order because his artwork with them would be political. "I was very surprised and frustrated because [my] show was coming up. ... I put on my Instagram account that I'm being refused [by Lego], and almost all newspapers started writing 'Why this guy can't get his Legos?' Suddenly, I had been victimized," he said, pointing out the irony in juxtaposing his work on human rights with how the world viewed his not being able to get Legos as a significant issue. The incident led Lego to change its policy on bulk orders and to stop asking customers what they are using them for.


But Shiner and Ai's talk wasn't all humor. Ai minced no words when he began to speak about the refugee crisis in the Middle East and Europe.

"This is a tragedy of our humankind today, and anybody pretending not to know it is a crime," Ai said. "As someone called an artist activist, I have some kind of obligation to this."

Ai set up a studio on the Greek Island of Lesbos, where many Afghani, Iraqi, Syrian and other refugees are disembarking from overloaded dinghies.

Ai's Instragram account is full of photos from his visits to refugee camps.

Another poignant, socially conscious moment happened at the beginning of the program when surprise-guest Jasiri X performed his new work "Our Generation," calling attention to institutionalized racism and sexism as well as labor issues. "Our generation ... we will dismantle institutions based on patriarchy ... and build new ones," he recited to the crowd.

A photo of Jasiri X and Ai can be seen on the artist's Instagram feed.

At the end of the program, Shiner thanked Ai for taking time from his work on the refugee crisis to visit Pittsburgh, and the artist walked off stage to a standing ovation.

The Andy Warhol | Ai Weiwei exhibit is at the Warhol until Aug. 28. Additionally, Ai's Circle of Animals/Zodiac Heads is on exhibit at the Carnegie Museum of Art's Hall of Architecture until Aug. 29.