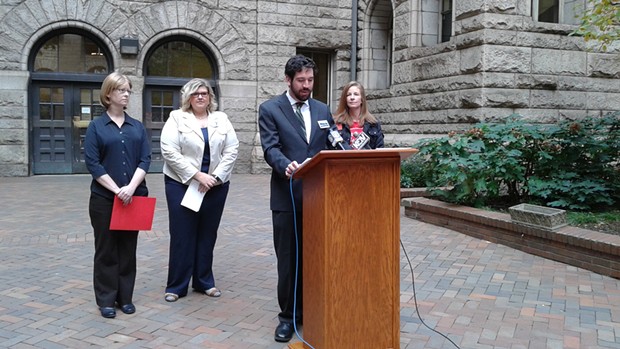 The PennEnvironment Research and Policy Center announced its report "Dangerous and Close," which draws attention to the proximity of hydraulic-fracturing operations, or fracking, to certain types of facilities in Pennsylvania, including schools, day cares and nursing homes. The report has prompted five health and environmental groups to form a coalition and demand better policies from elected officials.

"We must take basic steps to protect our kids and other vulnerable populations from the negative health effects of fracking, and advocate on their behalf in a political process that favors frackers," said Stephen Riccardi, of PennEnvironment.

According to the report, there are 166 schools, 165 child-care facilities, 21 nursing homes and six hospitals within one mile of a permitted fracking well site — that's 53,000 children under age 10 and 41,000 seniors 75 and older living within that distance, the report says. It cites Pennsylvania Department of Environmental Protection numbers indicating that more than 9,000 unconventional wells — where fracking is the means of extraction — have been drilled and thousands more permits have been issued. The report also says that industry predicts that approximately 60,000 wells total will be drilled in Pennsylvania by 2030.

The report cites as cause for concern studies that associate proximity to fracking with health impacts. The report's authors also elaborate on pollution and safety risks to drinking water and air quality, as well as the risk of well blowouts and explosions.

PennEnvironment, in conjunction with another environmentally focused policy organization, the Frontier Group, recommends that lawmakers require a minimum one-mile setback for drilling operations from schools, day-care centers, nursing homes and hospitals. The report also recommends increased enforcement and penalties for companies in violation near those facilities, among other recommendations.

As regulations stand now in Pennsylvania, the buffer zone for drilling near any building — a school or not — is 500 feet from the actual wellbore, or hole, not from the perimeter of activities.

"We feel that a mile away will help reduce the health effects that drilling can have on children and all vulnerable populations who are impacted," said Patrice Tomcik, of the group Moms' Clean Air Force, who attended the press conference to share her concerns about her two children in the Mars Area School District. Currently, there is a disputed well pad, containing five wells, a little over a half-mile from her children's school campus.

Also in attendance were representatives from the Southwest Pennsylvania Environmental Health Project and SEIU Healthcare. Those two groups will join PennEnvironment, Physicians for Social Responsibility and the Alliance of Nurses for Healthy Environments to form the new coalition, Pennsylvania Health Professionals for a Livable Future.

The new coalition is also advocating for the one-mile setback minimum, as well as calling on elected officials to work toward banning open-air frack waste pits, to remove the doctor's gag order from Act 13, to create a public-health registry for public-health professionals to report fracking impacts, and to require training for health professionals about the health impacts of fracking.

"As health-care workers, we're deeply concerned about the future of health care, especially given that the long-term health impacts of unconventional drilling are largely unknown," said Amanda Lapina, of SEIU Healthcare.