At a meeting at Lighthouse Cathedral on June 26, a group of community partners presented a draft of their plan for the Hilltop Farm on the former Saint Clair Village public-housing project. The effort is being lead by: the Hilltop Alliance, a community group representing nearby neighborhoods; Grow Pittsburgh, an urban agriculture nonprofit; the Allegheny Land Trust, which works to protect land of natural value; Penn State Extension, Allegheny County; and Lighthouse Cathedral. 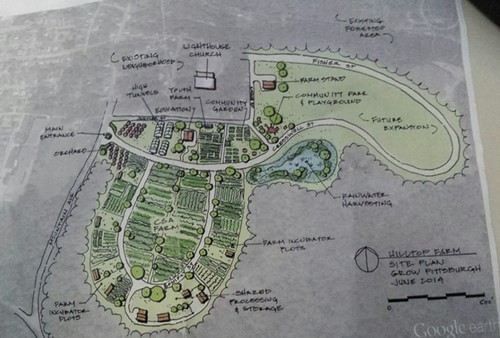 Under the proposal — which must be approved by the city Housing Authority, which owns the land, and by the federal government — the site will include a "farm incubator" with 19 quarter-acre plots. These plots will be used for a farmer-development program; Hilltop residents will be given priority for placement in the program.

A youth farm will take up one-half to one acre of the site, while other space will be devoted to a community garden, community park and playground.

"There are quite a few young people in the area and [the need to provide] opportunities for young people is something we've heard time and time again in consideration for this site," said Julie Butcher Pezzino, executive director of Grow Pittsburgh.

Five acres of the area will be devoted to community supported agriculture (CSA). People will buy shares or memberships and will in return receive regular boxes of produce grown on the farm. Revenue from the CSA will be used to support other programs at the site and could also be used to subsidize subscription boxes for nearby low-income residents.

The next phase of the process will include interaction with the Housing Authority of the City of Pittsburgh, an environmental review of the site, traffic study, zoning changes, and more community outreach. Some work has already been done.

"Preliminary soil testing has eliminated a lot of the concerns we had with things like lead poisoning," Pezzino said.

Hilltop Alliance expects to present the proposal to the HACP board, which could either sell or lease the site, as early as this autumn. The plan wouldthen go before the federal Department of Housing and Urban Development, perhaps as early as winter 2015.