Another workshop for A Gathering of Sons, commissioned by Pittsburgh Festival Opera, is tonight at this Shadyside church. 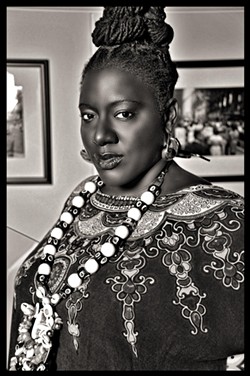 Librettist Tameka Cage Conley
Gathering of Sons examines police brutality and racial conflict in America through the lives of a young black man, a white police officer, a pair of black parents, and their guardian angels. It was commissioned as part of the Pittsburgh Festival Opera's series Music That Matters, aiding creation of operas that speak to present-day issues.

Attendees at  workshops view selected scenes, and then engage in a discussion about the work with panels comprised of community leaders, activists and artists. Audience feedback informs development of the piece and of future programs. Workshops for the show began in December. All of the workshops are free and open to the public.

Dwayne Fulton, the minister for music at Larimer's Mt. Ararat

Baptist Church, is composer and conductor for this project. The libretto is written by Pittsburgh-based poet and playwright Tameka Cage Conley. Mark Clayton Southers, artistic director of Pittsburgh Playwrights Theatre Co., is stage director and one of the featured discussion moderators.


A Gathering of Sons follows 2015's A New Kind of Fallout, the first opera commissioned for the series, inspired by the work of famed Pittsburgh-born environmentalist Rachel Carson.

Attendees at Gathering of Sons workshops can complete a short feedback form to receive a 40 percent discount on tickets to performances in the show's premiere run, June 15-July 8.

Reservations can be made by calling 412-326-9687. or online at pittsburghfestivalopera.org.