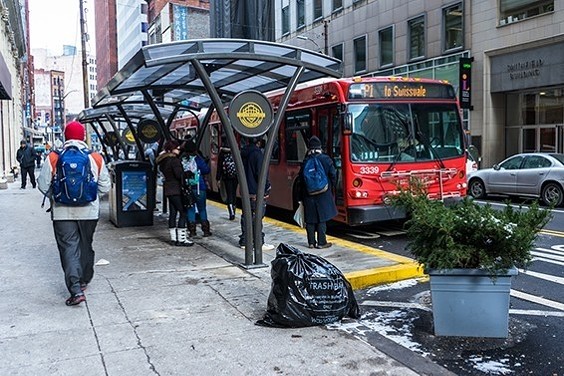 CP photo by Aaron Warnick
Port Authority bus picking up riders
One Feb. 24, the Port Authority of Allegheny County board added a last-minute agenda item announcing that Port Authority CEO Ellen McLean’s contract would not be renewed past June. The item wasn’t listed in the board meeting’s initial agenda, and when McLean spoke earlier in the meeting, she didn’t mention her imminent departure. The Pittsburgh Post-Gazette reported in a story headlined “Port Authority forces out McLean, seeks executive with more transit experience,” that some board members didn’t know about this decision until the night before the Feb. 24 board meeting.

At the time, Port Authority board chair Bob Hurley wouldn’t elaborate on the decision to cut ties with McLean, only saying that the decision between the board and the CEO was “mutual.”

"This transit agency has come so far from where we were just a few short years ago, which is why I believe now is the right time for me to pass the torch to someone else," McLean said in a statement issued after the Feb. 24 meeting.

On March 7, Fitzgerald nominated Hurley to serve on the county’s Airport Authority board. Fitzgerald says he wanted to see Hurley, who is also head of the county’s economic development team, on the Airport Authority because the county owns thousands of acres of developable land surrounding the airport. “The plan was always to move [Hurley] to the airport,” says Fitzgerald. “There is so much economic development opportunity there.”

However, Fitzgerald provided no comment on why Liptak would be joining the Port Authority board in the March 3 TribLive article, but told City Paper earlier today that he is confident in Liptak because “she does a good job wherever she is.”

Liptak, who Fitzgerald says will be leading the search for the new Port Authority CEO, has served in county government for years and offers a breadth of experience in budgeting and development, but with little official public-transit experience. But Fitzgerald says Liptak has been “involved in every transit decisions we make,” and she has “good relationships with all the stakeholders that deal with transit in the region.”

All of these big shifts with little public notice has made some advocates wary of the board-appointee process. Molly Nichols, of the public-transit-advocacy group Pittsburghers for Public Transportation, wonders why these big decisions happened so quickly and relatively quietly. She is calling for more transparency when board members are appointed.

“PPT would like to see more transparent processes for board appointments, including naming the qualifications of appointees and holding public hearings,” says Nichols. “This would give the public the opportunity to ask appointees how they plan to serve the transit riders of Allegheny County.”

This isn't the first time that Fitzgerald's handling of board appointments has come under fire. Although he has since abandoned the policy, after taking office in 2013, he required all board members to submit undated letters of resignation that Fitzgerald could activate at any time. There was also some tumult when Fitzgerald ousted PAT's former director and put his own appointees in power positions, also in 2013

But Fitzgerald says the timing of Port Authority CEO leaving and Hurley moving boards shouldn’t be taken as upheaval at the Port Authority. He says the reason these changes were made quickly is because the authority is stable. “It is not like we have all these problems we have to make changes, it’s just the opposite,” says Fitzgerald.

In terms of increasing public participation in the appointee process, Fitzgerald believes the current system works fine as is.

“We get a lot of folks who suggest board members,” says Fitzgerald. “At the end of the day, the elected officials are given the responsibility that these agencies run well. If it doesn't run right, we are going to be the ones taking responsibility.”

This sentiment somewhat echoes a statement made by Steve Palonis, of Amalgamated Transit Union Local 85, after the announcement of McLean’s departure. Palonis said in the Post-Gazette, “Rich [Fitzgerald] is the guy in charge and this is what he wants to do.”