Almost as soon as the Delta Foundation announced Iggy Azalea would headline Pittsburgh Pride in the Street on June 13, backlash against both the performer and organization ricocheted across the internet.

But for many in the LGBT community the choice to bring in Azalea, who has drawn criticism for statements that many consider to be racist and homophobic, is just the tip of the iceberg.

Though a Facebook event protesting the decision to hire Azalea had garnered about 300 attendees at press time, “The Iggy Azalea thing was just a last straw for folks,” says Michael David Battle, founder 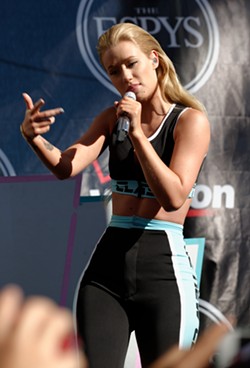 By Justin Higuchi from Los Angeles, CA, via Wikimedia Commons
Iggy Azalea's upcoming performance at Pittsburgh Pridefest has ignited a controversy around the Delta Foundation.
of the Garden of Peace Project, a local organization that often works with the most vulnerable LGBT people. “Since Delta took [Pride] over, it’s been a white, cis, gay man’s event.

“It goes back to the root of pride and how pride was started — by two trans women of color who were retaliating against police violence," Battle says of the Stonewall riots. "That type of rebellion of trans women of color is something that has to be celebrated and honored” — something he says Delta has never done.

Joy KMT, who created the Facebook event, echoed Battle's sentiment: “We are in a time ... where there are uprisings all over America. Black trans women are being killed all over the nation. For it to be whitewashed is a destruction of legacy.”

Partly because of Delta's lack of diversity, Battle is calling for an apology and the resignation of Delta head Gary Van Horn to be "replaced by a black queer and/or trans person."

Reached by phone, Van Horn would not comment. He asked that questions be sent via email, but did not immediately respond to an email request. We will update this post when he does. Delta came under some scrutiny early this year after it shuttered its own publication, Equal Magazine, without notice after staffers claimed they were not paid consistently.

Harrison Apple, co-director of the Pittsburgh Queer History Project, points out that the speed with which organizational critiques of Delta have been made "tells you they've been on people's minds for quite a while."

"What I find frustrating every year, is that the foundation describes its mission as 'to be a vigilant catalyst for change that produces increased opportunities and a high quality of life for the LGBT community,'" Apple responded in a written interview.

Instead, adds Apple, "It's a social organization better known for paying six-figure booking fees than reforming police practices, supporting grassroots organizations, [than] substantially funding the human services that are so desperately needed in Pittsburgh."

Update (10 p.m.): In response to specific questions from City Paper the Delta Foundation responded with this statement:

As the leading LGBT organization in Western Pennsylvania we believe in advocating for every member of our community and we do that in many ways. Specifically, the Delta Foundation has:

If we believed that Iggy Azalea was racist or homophobic, we certainly would not have selected her to headline Pittsburgh Pride. We also don't believe she would have agreed to come if she was racist or homophobic. Iggy is a highly regarded artist and female entertainer and we have received a tremendous amount of positive messages from members of the community and our allies both locally and nationally that are excited that she will be performing at Pittsburgh Pride.

We believe that the push back is part of a larger discussion happening across America as it relates to race and gender. We believe that same conversation needs to happen here in Pittsburgh and today reached out to several community leaders about facilitating a discussion about race and gender specifically as it relates to the LGBT community. We look forward to being a part of this conversation in the very near future as we work to make Pittsburgh the most livable city for all.

Editor's Note: This post has been updated to clarify Battle's request for an apology and replacement of Van Horn.