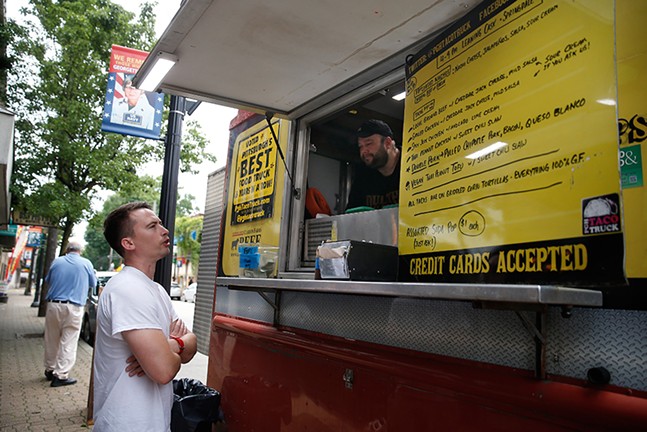 Sure, the truck has over 40,000 followers combined on its social media sites. But no, not that.

“Once, a customer walked up to us at a stoplight, asking for tacos. We thought he was joking, but we had a bag of tacos we were going to eat ourselves, and I said, ‘Why not?’ and passed him the bag through the front window.”

Rich has been one of the leaders of Pittsburgh’s food truck renaissance since 2013, when he first started serving tacos from his easy-to-spot red-and-yellow truck. Before then, he worked at numerous Pittsburgh restaurants — including a brief stint as an owner in 2001, when he opened Café Du Jour, a French-inspired bistro on the South Side.

But it was his three years in the early 1990s, working on the Burrito Buggy as a college student in Athens, Ohio, that Rich credits with “laying the blueprint in my mind for the taco truck.”

When he first started talking about his food truck business plan, most people balked at it. “Lots of obstacles: the weather, the restrictive ordinances, and restaurants weren’t fans of competition,” he says.

“Food trucks are a viable industry in this town, employing hundreds of people, allowing more entrepreneurs to enter the market,” Rich says. “I think we will see it grow even bigger over the next several years.”

“The more food trucks there are, the larger the crowd,” he says. “Each month, there’s a new food truck, and that has translated to more acceptance of food trucks, more events with food trucks, and even more business to go around.”

What does he predict is next?

“When I worked on the Burrito Buggy in Athens, the Bagel Buggy was parked next to us,” he says. “So, I guess I was spoiled!”