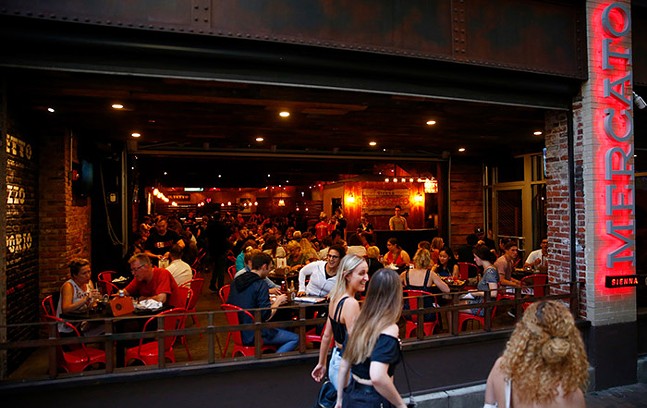 CP photo: Jared Wickerham
Downtown's Sienna Mercato, shown here pre-pandemic, is one of the restaurants that will soon benefit from less traffic on Penn Avenue.
Allegheny County may be in the green phase of the state’s coronavirus recovery plan, but the area is not out of the woods. Yesterday, county officials announced 45 new coronavirus cases counted on June 22, and said the minor spike in cases was likely driven by people visiting restaurants and bars.

With the possibility of high numbers of COVID-19 cases returning consistently to Pittsburgh, as they have in other areas, the city has taken steps to ensure some restaurants have plenty of outdoor space, to avoid patrons eating and drinking inside, where infections spread much easier.

Several streets in Pittsburgh have been temporarily reconfigured — either by closing down to car traffic or removing parking spaces — so restaurants and bars can add tables and chairs to serve large volumes of customers, while still following social distancing guidelines.

Earlier this month, the city asked for suggestions of where to close some roads in order to allow for proper social distancing during recreation and leisure. This meant some roads in parks have been closed to car traffic, but also that some roads in business districts basically had their sidewalk dining extending into the street. Here is a list of soon-to-be and current road closures reserved for expanded patio dining.

Pittsburgh City Paper will update this story when new streets are added or streets open back up to vehicular traffic.

Learn about the project, supported by @PNCBank and the R.K. Mellon Foundation ➡️ https://t.co/dSnXDbDkgH

Sixth Street
For two blocks in between Fort Duquesne Boulevard and Liberty Avenue, Sixth Street will be reconfigured, but not completely closed to vehicular traffic, to provide more dining space for the dozen or so bars and restaurants along that stretch. Lanes between Penn Avenue and Liberty will be shrunk to make more room, and between Penn and Fort Duquesne, Sixth Street will be one way headed outbound with the other lane used for outdoor seating and a bike lane. This stretch is home to restaurants like Butcher and The Rye, Gaucho Parrilla, Redbeard’s, and Tako. Outdoor space is expected to be fully activated by early July.

Market Square
The popular plaza, which for some reason still typically allows vehicles to drive on its bumpy cobblestone, will be closed to vehicles moving forward (except for deliveries and emergencies). Extra tables will also be provided by Pittsburgh Downtown Partnership, where diners at the scores of restaurants and bars that fill the plaza can utilize. Market Square is home to City Works, Primanti Bros., Starbucks, Chipotle, Original Oyster House, The Yard, and many others. Outdoor space is expected to be fully activated by early July.

Penn Avenue
In the Cultural District, Penn Avenue between Ninth and 10th streets will be reduced to one lane of traffic, presumably by eliminating parking spaces on this block since the road is already one-way with a protected bike lane. Restaurants on this stretch include Sienna Mercato, Sharp Edge, and Nicky’s Thai Kitchen, among others. Outdoor space is expected to be fully activated by early July.

Strawberry Way
The popular alleyway is already mostly closed down to vehicular traffic, but this effort will extend that all the way from Smithfield to Grant streets. This will give Villa Reale Pizza restaurant, Wiener World, and The Commoner some outdoor dining space. Outdoor space is expected to be fully activated by early July.

Shiloh Street
On the weekends, a section of Shiloh Street is closed to vehicular traffic to allow for several of the popular establishments up there to have outdoor space. Take the incline up and enjoy Shiloh Grill, The Summit, Sesame Garden, and more.

Oakland Avenue
Pittsburgh’s college neighborhood is also joining the patio dining trend, as Oakland Avenue between Sennott Street and Forbes Avenue is closed to vehicular traffic. This gives a lot of extra outdoor dining room to Fuel and Fuddle, Stack’d burger bar, and Fuku Tea, which serves boba tea and sushi. Planters are used on one side to block traffic.

Froman Street
A small side street out in front of Scratch Food & Beverage in the North Side neighborhood has been closed to through traffic to provide for the small restaurant some much-needed space to serve customers. The closure appears to be every day of the week.
© 2022 Pittsburgh City Paper