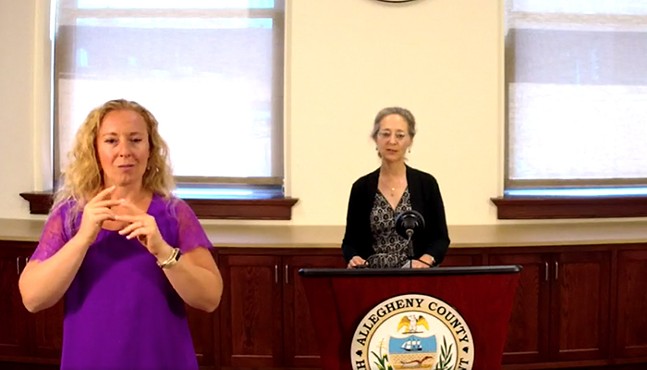 Bogen called these results "concerning" and noted that last week's number of new cases was double what it was two weeks ago. She said that last week saw 134 new coronavirus cases in Allegheny County.

Bogen said today's spike in testing was likely from people going out to restaurants, bars and community events, as most of the people who tested positive reported going to these locations. She said there was no evidence that the recent spike in positive tests were linked to protests, mass gatherings, or voting.

Protest have been ongoing since May 30, but the biggest two protest gatherings occurred more than three weeks ago, and typically new cases are related to events that happened two weeks prior. Pennsylvania's primary election was held on June 2.

Bogen said that new cases were primarily from younger residents, which is different from earlier in the pandemic, when cases in Allegheny County were mostly from people 65 and older.

Fitzgerald reminded county residents to wear their masks, and said he doesn't want Allegheny County to experience a serious increase as has happened in other states in the South and West. He called today's spike a "little bit of a reality check."

"We have seen a little bit of increase," said Fitzgerald. "I think there has been a bit of natural relaxation as we went into the green phase. But I saw a 'no mask day' on social media, and I can’t think of anything more irresponsible."

Bogen said the spike could be linked to people traveling out of the area and recently returning to the county. "I think we had been really protected here in Allegheny County, and now that people are traveling and coming back and bringing new cases, that may be changing," said Bogen.

She encouraged people to get tested even if they are experiencing mild symptoms, like a runny nose or congestion. If people without symptoms were in contact with a known positive case, they should wait seven days to get testing to avoid false negatives, said Bogen.

"If you are going on vacation, don’t a break on precautions," said Bogen, who reminded people to wear masks over mouth and noses, avoid indoor crowds, and to maintain physical distancing standards.

For businesses, she suggested workplaces divide staffs up into groups and make sure that those members in those groups only work together, as a way to keep staff as isolated from each other as possible.

"I am concerned with the new numbers," said Bogen. "We can fix this. We don’t want to have to close businesses again."

Protesters say get the frack out of Allegheny County parks