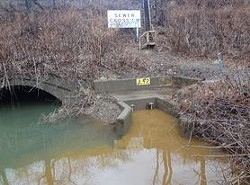 Photo by Ashley Murray
Combined sewer overflow during wet weather event in the winter of 2014
If you're about to go kayaking or fishing but aren't sure if the river's clean, you can receive safety alerts on your phone via text or email.

The Allegheny County Sanitary Authority (ALCOSAN) is in its second year of reaching residents on their mobile devices and is working to spread the word about the alert system for the upcoming water-recreation season. Traditionally (and still today) residents could find out via color-coded flags along the river or on ALCOSAN's website.

Residents can subscribe online and receive mobile messages notifying them if a wet weather event has stressed the county's sewer system to the point where not just stormwater, but sewage as well, is overflowing into the rivers. Much of the county has combined sewer systems, meaning that stormwater and sewage flow in the same pipes. Simply, when the pipes get too full, they overflow into outlets along our waterways.

“During heavy rain – and even snowmelt, which we all hope is done, for now – stormwater pours into the regional sewers, overwhelming the system,” said Jeanne K. Clark, ALCOSAN’s public information officer, in a press release. “When that happens, the diluted sewage and stormwater overflow into our rivers and streams. Our alerts are designed to help keep the public safe by making sure everyone knows when this occurs.”

ALCOSAN is under a federal consent decree to fix the issue, which violates the Clean Water Act. The fix is going to cost billions, and in March, Mayor Bill Peduto and County Executive Rich Fitzgerald asked the EPA for more time to incorporate "green" infrastructure — meaning infrastructure that would soak water back into the groundwater system instead of transporting it through bigger pipes.

Clark says ALCOSAN is still negotiating with the EPA on "a whole lot of things," including green infrastructure, and hopes to finish up and move to a public comment period by the end of this year.

ALCOSAN will be posting alerts about sewer overflow risks from now until Oct. 31.