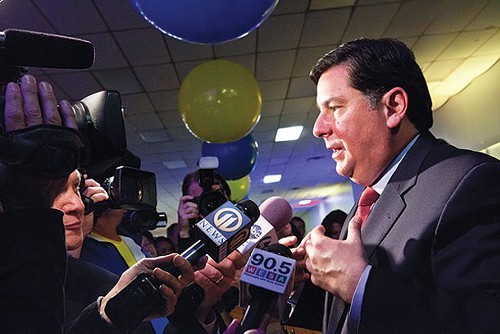 Monday is Bill Peduto Day in the city of Pittsburgh and his transition committee has announced a whole slew of Inauguration Day activities, including a photo-op for “portraits” with the mayor and his cabinet at the Wintergarden at PPG Place.

It’s never too early to get that 2014 Christmas card photo taken care of.

The public meet-and-greet will begin at 2:30 p.m. and follows the official swearing-in ceremony at 1 p.m. on the steps of the City-County building. All events will feature a food and cash donation drive to benefit the Greater Pittsburgh Community Food Bank. The Pittsburgh Foundation will match a portion of donations raised.

The full release is after the jump.

The Committee will partner with the Greater Pittsburgh Community Food Bank by accepting food and cash donations at all events throughout the day, and through an online campaign located at www.pedutofooddrive.com. The Pittsburgh Foundation has graciously offered to match a portion of amounts raised during Inauguration Day to help our less fortunate neighbors.

The Swearing-In Ceremony will begin at 1 p.m. on the steps of the City-County Building. Delivering the Oath of Office will be Senior Superior Court Judge Justin Johnson. Due to space constraints, seated attendance to the ceremony is limited by ticket admission only. Spaces have been made available to the general public.

Immediately after the Swearing-In Ceremony, the new Mayor and his cabinet will meet with the people of Pittsburgh at the Wintergarden at PPG Place from 2:30 − 4:30 p.m. for portraits. Thanks to the generosity of Highwoods Properties, Magic Ice and the Building Owners Association of Pittsburgh, free ice skating and complimentary hot chocolate and coffee will also be available through 5:30 p.m. There will be locations for people to drop off canned goods to support the Greater Pittsburgh Community Food Bank at PPG Place throughout the day.

At 7 p.m., the Inaugural Celebration will take place at the Heinz History Center. The event is by invitation only and will include more than 20 musical and performance acts throughout the entire facility. Guests will also be treated to "Tastes of Pittsburgh" and will be encouraged to do their part to help our neighbors by donating to the Greater Pittsburgh Community Food Bank.