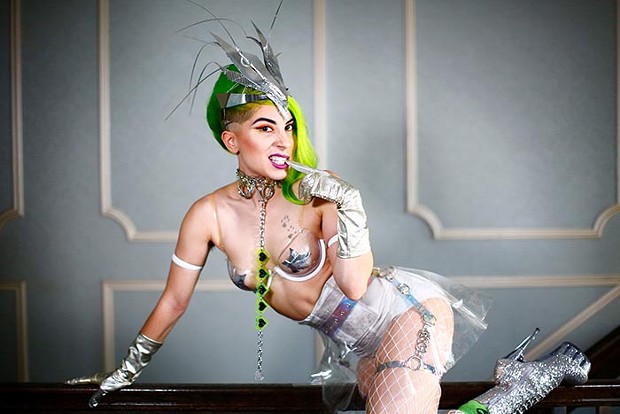 “My specialty is in my feature performance numbers,” says Fagnelli, a self-described “third generation yinzer” who has performed as a stripper for the past seven years. Their alter-egos tend to lean toward science fiction, including cosplays of the campy space heroine Barbarella, Leeloo from Fifth Element, and Mystique of the X-Men movie franchise, as well as a “few extraterrestrial characters” of their own creation.

Transporting fans to other worlds might be why they won Best Stripper in this year’s Best of Pittsburgh readers’ poll, but it’s not the only thing the local artist and performer focuses on. Their website describes them as a “multi-media multi-medium creator” bridging drag, pole, prose, video art, soundscapes, installation art, and “many forms of movement.” This year, they completed the Kelly Strayhorn Theater Freshworks digital residency program, working with local dance duo slowdanger and artist and performer Jordan Harris.

While based in Pittsburgh, Fagnelli’s work has garnered wider attention, including being profiled in a 2018 Vice story about life as a queer-identifying stripper. In it, Fagnelli details how stripping provided a community for them, pointing out how, while strip clubs are viewed as spaces catering to the desires of cis, straight men, “at least a third of the dancers I've worked with in clubs across the country are LGBTQ.”

“It adds a level of camaraderie the same way any other marginalized identity finds comfort in finding each other,” Fagnelli told Vice. “I've had the joy of working with queer customers, and most of those experiences have been powerfully subversive in a (seemingly) heteronormative space.”

Fagnelli says that, before the pandemic, they performed at venues and strip clubs in Pittsburgh and beyond, as well as at private parties, birthday and bachelorette events, and kink nights at gay clubs. Since getting vaccinated and emerging from quarantine, they have been primarily accepting bookings for events at outdoor venues and online showcases.

Fagnelli says they are “heading west for the winter,” but locals should keep an eye out for shows coming back to Pittsburgh in the spring. You can also follow them at their social media accounts and website where they post video art, and document their travels.
Gia Fagnelli. giafagnelli.com