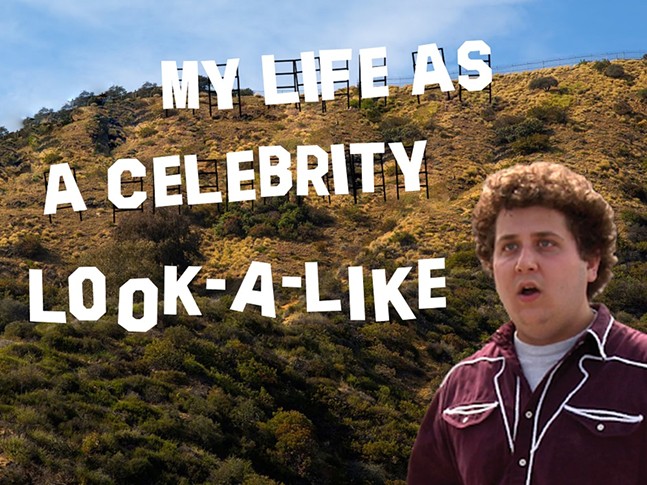 Steven Sims and Josh Larkin
My Life as a Celebrity Look-A-Like podcast
Actors aren't always looking for that big breakout role, many are just hoping for steady work. For Steven Sims, dreams of pursuing an acting career around 2007 quickly hit an unexpected obstacle — he looked exactly like Jonah Hill.

By “exactly,” we mean he was mistaken for Hill by paparazzi who snapped and published photos of him, and he took photos with fans who confused him for the Superbad star.

Now Sims’ experience working in Hollywood in someone else’s shadow has become the focal point of the Pittsburgh-produced podcast My Life as a Celebrity Look-A-Like. Co-hosted by Sims’ locally-based friend Josh Larkin, the eight-part series covers the few years Sims spent in Los Angeles known as “the other Jonah Hill.”

“I think this series speaks to what it is like to work in show business at a young age,” says Sims, who still lives in LA working as a full-time supervising producer and occasionally taking acting gigs. “These stories took place when I was 23 to 27 years old. I'm now 37 and can't believe some of the decisions and choices that I made when I was first starting out. But overall it does speak to the realness that is show business and Hollywood.”

The show features appearances from fellow actors and others who were there in Los Angeles from 2007 to 2010 when Sims went through this strange period in his career. This includes starring as a Hill double in the 2010 comedy spoof The 41 Year Old Virgin Who Knocked Up Sarah Marshall and Felt Superbad About It and making Destroying Jonah Hill, a 14-minute short film in which a dejected Sims “decides the only way he can succeed in the entertainment industry is by destroying Hill's public image,” according to the IMDb synopsis. Sims wrote and produced Destroying Jonah Hill with Mike Roach, who appears on the podcast.

So far, other guests have included Sims’ friend and fellow actor Alison Trumbull, Destroying Jonah Hill director Dylan Stern, and WYEP DJ Joey Spehar, who recounts becoming aware of the 2008 short when it made its east coast premiere.

Larkin, who formerly co-hosted the Pittsburgh-based Thrifty Podcast, says he and Sims met in 2002 while attending Robert Morris University as freshmen. Larkin says that, while he had no intention of returning to podcasting, and was trying to focus on personal issues after his father died, he saw My Life as a Celebrity Look-A-Like as a “unique opportunity to reconnect with a long-lost friend.”

“We had maintained a casual 'Facebook style' friendship since college,” says Larkin. “It was six months to the day I got sober that Sims texted me ‘Have you ever considered getting back into the podcast game?’ Once he told me the pitch and how we could really get into how crazy some of the stories were, it became obvious I couldn't pass it up.”

Sims says that Larkin had never heard these stories before, adding, “I figured if I was going to share them with him, we might as well record them."

The co-hosts, who live cross-country from each other, recorded the show remotely, all while working with producer Drew Agan, who Larkin says “really put out a digestible story in eight episodes.”

Larkin says that doing the show has made him realize the sheer depth of superficiality in show business. “I always had that expectation, but hearing some stories first hand really put a human perspective on what these people have to go through,” says Larkin.

It also provided insight into how multifaceted and nonlinear it can be to work in the entertainment industry.

“Everyone I have met in the business since we started recording, has been so incredibly versatile,” says Larkin. “Whether it's a comedian writing a book, or an actor learning musicianship and editing, I learned that it really takes a unique set of traits and drive to be successful where at any given moment something new may be asked of you.”

Sims says the podcast has also given him something to do over the course of the pandemic, as he hasn’t been able to travel for work. While they planned for My Life as a Celebrity Look-A-Like to be a one-off season, he’s considering a similarly themed follow-up season. “I know that there is a Michael Cera look-a-like out there somewhere,” says Sims. “I've worked with him.”

While it serves as a compelling look behind the scenes of Hollywood, Sims and Larkin want the podcast to serve as a fun, nostalgic escape for listeners.

“Throughout the season there's a theme of re-connection and recollection amongst friends — who remembers what, and how it is remembered — and I think that's an opportunity to explore some pretty deep shit beneath the surface,” says Larkin. “These stories are of a very crazy time in Sims life and I feel like we got to open a time capsule from half a life ago and explore those moments with friends, so I hope people find some way to do that in their own life.”

My Life as a Celebrity Look-A-Like is now available on Spotify, Google Podcasts, and other platforms.
© 2022 Pittsburgh City Paper