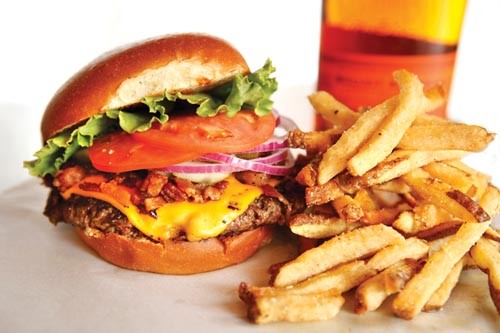 While it would be pointless -- impossible actually -- to separate Zach Winghart's new Downtown burger restaurant from the burger boom that has swept the city in the past year, that's not to say that Winghart's doesn't set itself apart.

First, there is the name: Winghart's Burger and Whiskey Bar. No mention of beer (though Winghart's taps admit that a cold wheat soda sure does go down well with burgers), and certainly not milkshakes. We're talking old-fashioned, burns-your-throat, revives-the-dead whiskey, friends.

Combine that with the tattoo-style art on the walls and the rather impressive facial coiffure sported by Mr. Winghart and his chief collaborator, who calls himself Shipwreck, and it feels less like a revisionist take on the American drive-in classic and more like a dive bar for hipster aesthetes.

Winghart's feels welcoming to everyone, though, even if the long, narrow space scarcely merits the term "restaurant." Tucked in a corner of Market Square, Winghart's consists of a bar up front, a massive brick oven (for pizzas; hold that thought) in the middle, and a few bar-height tables lining the wall in the back. There are intimations of upstairs dining in the future, but whether limited by building codes or budget, it hasn't happened yet. The walls are decorated with glossy paintings on board that utilize stencil, collage and other high-low art elements, but the main decorations are the griddle, the oven and the shining amber array of whiskeys.

The brief menu doesn't attempt to stretch the definition of burger. While there's a veggie burger on offer, and turkey can be substituted for beef, Winghart's is fundamentally about the chuck that the owner, a certified butcher, grinds himself daily. Served on gloriously glossy challah buns from Mediterra, they speak for themselves without resort to pseudo-gourmet toppings or elaborate origin stories. (Family members are credited for their favorites in the menu's conversational descriptions, but that's about it.)

We picked three sandwiches. The simplest, a cheeseburger, was a complete success: succulent beef on a bun with plenty of chew and crumb to absorb juices, but not so crusty as to make big bites a challenge. Winghart's patties are large, but broad rather than tall, which makes them easier to bite as well as to top. Instead of a Dagwood-style strata of ingredients, these burgers had room for toppings to meld more naturally in every bite. This was most evident in the Denny Double Blue burger, topped with blue cheese dressing and dry blue cheese for a double hit of creamy, tangy contrast with the burger's robust beefiness.

And if that's not decadent enough for you, try the Shipwrecked Burger, topped with brie, caramelized onions, bacon, arugula and white truffle oil. This tasted every bit the indulgence it was: juicy, creamy, sweet, smoky and salty, all at once. We already knew that a good burger could be a satisfying meal in itself. This proved that it could be a sophisticated one, too -- at least, as long as your definition of sophisticated dining doesn't include plates. Winghart's serves its sandwiches wrapped in paper, no apologies. But because the toppings aren't spilling out all over the place, it worked out OK.

Another thing that sets Winghart's apart is its choice of pizza, rather than hot dogs or other hot or cold sandwiches, as the menu's secondary focus. Wood-fired pizza is hardly new, but that doesn't mean that every place, or even most places, do it well. As it should be, the crust is the star of Winghart's excellent pizza. It was so good, so full of bready, yeasty flavor, so chewy without being either fluffy or tough, that we wouldn't dream of leaving our crusts uneaten on the plate (er, paper). The toppings passed muster as well. These were no lightly topped, Neapolitan-style pies; instead, a generous hand combined with good ingredients to create pies that balanced nimbly between pizzeria-grade and gourmet. They were hearty and belly-filling, yet well-crafted and not fussy.

Speaking of full bellies, we tested our limits with chili cheese fries. The chili was made with large crumbles of (no surprise) beef, big beans and a well-seasoned, yet mild, sauce. It worked well with the fries to create something closer to an entree than a side, but we kind of wished we'd gotten straight fries, because the ones that stuck up out of the chili were outstanding: crisp, deeply flavored from a dark fry and still light inside. A great burger deserves great fries, and Winghart's delivers on both.