Off the Wall Productions recently marked its fifth anniversary on that borough’s main street; borough officials issued a proclamation citing the theater company as a community asset. But apparently not everyone agrees that Off the Wall and its venue, Carnegie Stage, are ideal neighbors.

Since June, says managing director Hans Gruenert, Off the Wall has been targeted by both a protest organized by local Catholic churches and by an act of petty vandalism. Both incidents came in response to the theater's programming: in the former case, a show benefiting Planned Parenthood, and in the latter, a dance performance exploring the world of sex work. And Gruenert adds that a source he considers reliable has told him a petition is circulating to have the borough revoke Off the Wall’s business license.

Photo courtesy of Carnegie Stages
Participants at a June 1 protest at Carnegie Stages organized by local Catholic parishes
Tomorrow night, in response, supporters of Carnegie Stage are organizing a silent walk through the borough, with several women wearing the distinctive costumes of characters from the Hulu series The Handmaid’s Tale, based on Margaret Atwood’s novel about a society were women are denied the right to make basic life choices.

Gruenert says the march is supported by the feminist group UltraViolet, which has staged similar protests in other cities.

Tomorrow's march in Carnegie will take place during the borough’s monthly gallery crawl, when businesses stay open late, and will coincide with the summer festival of one of the churches involved in the June 1 protest.

Off the Wall, founded in 2007 by Gruenert and his wife, theater artist Virginia Wall Gruenert, focuses on promoting work by women playwrights, directors, actors, dancers, choreographers and more. The company was launched in Washington, Pa., then moved to Carnegie in 2012.

The 93-seat theater is located in the heart of Carnegie’s business district and is busy year-round, with both Off the Wall productions and rentals.

Hans Gruenert says Off the Wall had little but positive feedback until June 1, when it hosted a one-night cabaret performance, a portion of whose proceeds benefited Planned Parenthood. About an hour before the show, about 30 protesters turned up across the street, holding signs reading “Defund Planned Parenthood” and “Planned Parenthood Sells Baby Parts” (the latter claim referencing news reports which have been largely discredited). 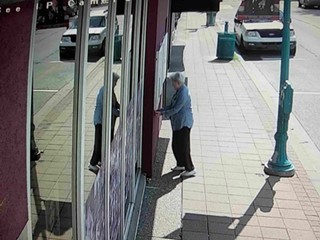 Photo courtesy of Carnegie Stages
An unidentified woman affixes a sticker to the wall of Carnegie Stages, as seen on a security-camera image
On July 30, hours before the final performance of Moriah Ella Mason’s one-woman show Sex Werque, a security camera captured an older woman approaching the theater in broad daylight and affixing a bumper-sticker to the wall beneath the poster. The sticker touted the White Ribbon Campaign Against Pornography, a long-running anti-pornography initiative supported by the Catholic Church, among other backers.

Regarding the stickering incident, Gruenert notes the irony of someone who opposes pornography protesting Sex Werque, a show that critiques the often-unpleasant realities of sex workers.

“I felt that this is not the kind of practice we want to bring into a neighborhood such as this one,” says Poecking, referring to the fundraiser.

Poecking and Gruenert know each other through civic channels and agree that to date their relationship has been cordial. As recently as last year, Poecking had even attended community-development meetings held at Carnegie Stage. “We’ve had a pleasant relationship of the sort that people running institutions in the same neighborhood might have,” says Poecking. “I thought Hans has been a helpful and amiable member of the community.”

Poecking told CP this afternoon that he was unaware of the stickering incident. He also said that he had not heard anything about a petition against Off the Wall. However, he acknowledges that he has privately told other community leaders in Carnegie that he would prefer not to hold community meetings there if it keeps hosting events like the cabaret, in order to keep the church “visibly separate from anyone supporting Planned Parenthood."

Gruenert says that he is concerned that an apparent uptick in opposition to such work at Off the Wall signals a new wave of sexism. “The Trump presidency has emboldened many to put their sexist attitudes into action,” reads the press release announcing tomorrow’s march. “It seems like some people feel very strongly that now is the time to turn the clock back,” Gruenert tells CP.

Gruenert says that while he has not recently spoken with anyone from any of the churches involved in the June 1 protest, he has approached Carnegie Mayor Jack Kobistek about both incidents, and the two discussed Kobistek mediating a discussion between Gruenert and representatives of the other churches involved. “I think both sides are extremely reasonable, by the way,” says Kobistek. “They’re great citizens. They all do a lot for the community. They’re all very respectful people. … I’m sure it’s something we can all come to the table and talk about it.”

Like Poecking, Kobistek said he had not heard of a petition seeking to shut down Carnegie stages, although he added that in any case, “I don’t think a petition can close down a private business that hasn’t violated any laws.” And he said police have been unable to identify the woman who stickered the building. 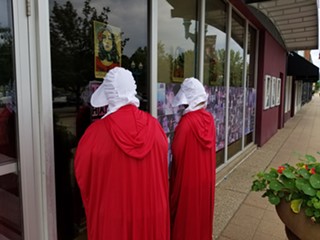 Photo courtesy of Carnegie Stages
Costumed marchers like these will hit the street in Carnegie on Friday night
The Handmaid’s March for Carnegie Stages takes place starting at the theater, at 25 W. Main St., at 5:15 p.m. Fri., Aug. 11. Marchers wearing the show’s distinctive red cloaks and white bonnets will remain silent throughout the route, which will circle St. Elizabeth Ann Seton Parish.

“What we want is to make a point that we can mobilize a lot of people if we have to,” says Gruenert.