Spider-Man: No Way Home makes for a satisfying swing into the multiverse | Pittsburgh City Paper 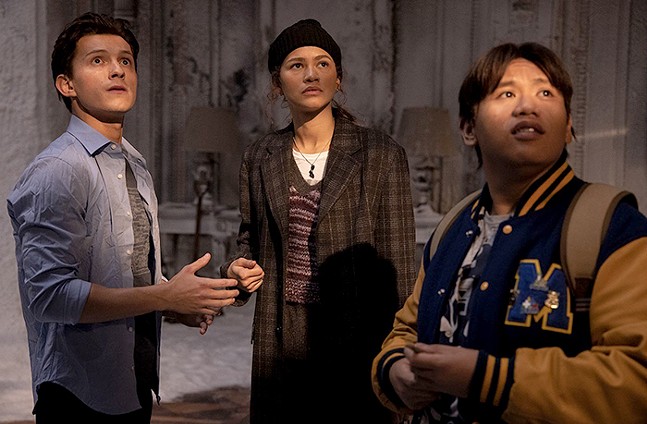 Here we find Peter Parker (Tom Holland) following the events of Spider-Man: Far From Home, the 2019 film that pitted our young hero against Mysterio (Jake Gyllenhaal) and saw his true identity revealed. No Way Home picks with Peter trying to navigate the consequences of everyone now knowing that he is Spider-Man. When he and his friend Ned (Jacob Batalons) and girlfriend MJ (Zendaya) are rejected from college due to the controversy, he enlists the help of Dr. Stephen Strange (Benedict Cumberbatch), and this is where the story picks up.

No Way Home is best described by Holland in an Instagram post he made shortly before the film's Dec. 16 release – a "labour of love" that celebrates three generations of cinema.

Fans of the MCU, but especially of Spider-Man, will not be disappointed. It’s well-known that characters from the Spider-Man films of the early 2000s, directed by Sam Raimi and starring Tobey Maguire, and from the subsequent Marc Webb movies, which starred Andrew Garfield, would be making appearances, further confirming the existence of a Spider-Man multiverse. Dr. Otto Octavius and Electro are brought to Peter’s universe, with Alfred Molina and Jamie Foxx reprising their roles from the past films.

Like most Marvel movies, No Way Home is emotionally painful, but in the best way. As mentioned before, redemption is a huge theme in the movie and, paired with the humor expected from the Spider-Man franchise, makes this latest installment very satisfying for fans.

Spider-Man: No Way Home will have audiences laughing, crying, and cheering at the screen, and is thoroughly entertaining throughout the entire two and half hour runtime.
Spider-Man: No Way Home is now playing at the AMC Waterfront 22 in Homestead, Manor Theatre in Squirrel Hill, Hollywood Theater in Dormont, and other Pittsburgh-area theaters.
© 2022 Pittsburgh City Paper