“This project has been a long time coming.”

At a Beechwood Boulevard entrance to historic Frick Park is a 60 percent-completed educational and welcome center. The three-story, 15,000-square-foot structure promises to be a model of 21st-century innovation.

“This project has been a long time coming,” says Parks Conservancy Director of Education Marijke Hecht. “The building that it replaces was burned in 2002. For several years the city worked very closely with the Parks Conservancy to develop a vision for what would come in its place.”

That vision — finalized after more than 1,000 people participated in the planning process — is a structure that will be as incorporated into its natural surroundings as much as is currently possible, according to green-building standards.

If it succeeds at the Living Building Challenge, the certification for which the Parks Conservancy is aiming, the building will create its own energy, and reuse as much water as state law allows. (Pennsylvania mandates that structures must tap into municipal lines for potable water.)

“Those are probably the two hardest [standards] to achieve, because you have to demonstrate that you’re generating all of your own energy on site and capturing all of your storm water on site, and doing all your sewage treatment on site,” Hecht says.The building itself has a slanted roof so that in heavy downpours the place becomes a water feature. Rainwater will be directed off the top of the structure into a locally commissioned sculpture and then down a waterfall-inspired set of stairs leading to restored wetlands. Several rain barrels will be on site, and pipes will connect to a 15,000-gallon underground cistern from which reusable, non-potable water will be used for a public fountain and toilet flushing. 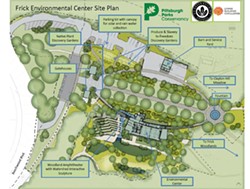 “As long as we capture more rainwater than we use,” says Hecht, the building still meets the Living Building Challenge, even though the law requires municipal water hook-ups.

There will also be a three-step sewage-treatment system on site. Once the water is treated, it will feed into a drip-irrigation system and back into the groundwater system.

As for energy, the building will use 40 percent less energy than a typical building of its size in the northeastern U.S. and will achieve net-zero energy usage by generating electricity with on-site solar panels. Indoor temperature will be regulated with a closed-loop geothermal heating and cooling system, which utilizes water that circulates underground in order to consistently remain at 55 degrees Fahrenheit. Insulation techniques are being employed for temperature regulation as well.

“As we look for new ways to be more efficient with our energy, this is of one of our best exemplars,” says Jim Griffin, director of Citiparks. Since the mid-’90s, the city and the Parks Conservancy have been working in a public-private partnership to improve and restore the parks system.

The city gave the conservancy nearly $6 million from the Frick Trust for the nearly $19-million project. The conservancy contributed $4.5 million, with $1.5 million from private donations, and the state and county kicked in $3.5 million. The remaining funds are still being raised. The building will be city-owned, however, as it sits on city land (similar to the Schenley Plaza model, where all buildings, even the Eat’n Park-run restaurant The Porch, are city-owned.)

“We could have built a simple structure there with traditional furnaces, air conditioners and sewers,” Griffin says. “This shows where we are as a city and how we’re leading the way.”

The new Frick Environmental Center will not be the first in Pittsburgh to achieve the Living Building Challenge. Phipps Conservatory’s Center for Sustainable Landscapes already has. 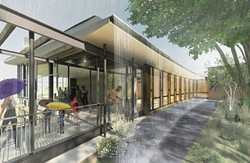 “I think the really interesting opportunity we’ve had in Pittsburgh is some of our [green] buildings are also educational facilities, which is great because it helps educate Pittsburghers and Western Pennsylvanians about why this is so important,” says Aurora Sharrard, executive director of the Green Building Alliance, a local organization that educates stakeholders on green building strategies. “It’s the decisions we make on a daily basis, not just a single building project.”

Another requirement for the Living Building Challenge is that materials need to be sourced within a specific mileage range, and all of them are to be non-toxic. The challenge designated  a “red list” of banned building materials, including certain treated wood, anything with Formaldehyde added to it, and Polyvinyl Chloride (or, PVC), among other materials.

“From a product standpoint, the LBC has a really high bar,” Sharrard says. “They're trying to move a market. They’re really asking questions that some manufacturers aren't ready and able to answer. It’s really starting a conversation in some industries.”

Park users, school children and summer campers will all be able to see how the Environmental Center saves energy, Hecht says. The geothermal heating and cooling pipes will be visible, a green/red-light system will indicate when people in the building should open or close the windows, and the jet on the public fountain will be human-powered by visitors (by means of a device still to be determined).

“The whole thing is basically a laboratory,” Griffin says. “You’ll see the [geothermal] well loops, you’ll be able to investigate the water-treatment facility and see how the stormwater is captured, and see the photovoltaic solar-power capturing system. We want people to understand it, match it and mirror it.”

“Only eight buildings in the nation have already achieved the International Future Living Institute’s living-building certification. They have over 200 buildings pursuing it,” says Sharrard. “In our region we’re actually really rich in thought leaders going after this really high standard.”