"When I smell compost, it smells good." 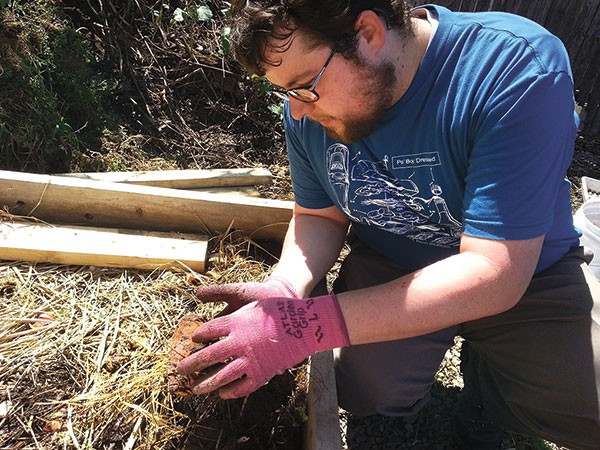 One trick to good composting, if you use worms, is coffee grinds.

"Worms eat their food mechanically. There is no acid in their stomachs to break that stuff down; they have no teeth. So they mush it around in their bellies," says Travis Leivo, as he grabs a handful of rotting food from a bin he started a few months ago. "If you have stuff like coffee grinds ... they will break down the food a lot quicker."

The 30-year-old Shadyside resident sniffs the compost in his hand as he talks: "I'm a weird geek. When I smell compost, it smells good. Like earth, natural dirt."

Leivo is working on a startup, Shadyside Worms, taking what has become his passion and turning it into a residential curbside compost pickup service, picking up food scraps weekly and offering, in exchange, the resulting fertilizer. Hosted at the moment at Shadyside Nurseries, the operation is small and limited to the East End. Leivo's goal, he says, isn't to immediately scale to servicing at the city's level of trash and recycling pickup. But he does hope he is creating the spark that could lead the city there.

"I don't want to just ... offer to pick up everybody's food. I want to teach people, get them involved, so that even if the city does end up doing it, they're informed on how to benefit from it."

There is interest, though. Another local company, Ag Recycle, works with large, commercial spaces to recycle their food scraps. But, for household and smaller businesses, options can seem sparse. Ryan Spak, owner of Spak Brothers Pizza, works with Leivo and the nonprofit Grow Pittsburgh to dispose of his restaurant's scraps. But it's not always enough: "The amount of compost we're putting out is overwhelming," he says.