At the Unblurred gallery crawl on Penn Avenue, PULLPROOF Studio opened Mirror, Mirror, a salon-style group exhibition featuring female and non-binary illustrators from Pittsburgh, Philadelphia, Cincinnati, and Kansas City. Run by a team of artists, the venue operates as a gallery in the front and as a membership-based workspace with a silkscreen printing facility in the back.

With two walls of art flanking a table in the center laid out with various zines, art objects, and clothing and accessories for sale, the show — curated by Emma Vescio and PULLPROOF communications director Christina Lee — comes with a distinctively laid-back, unpretentious feel. Much of this is owed to the focus on combining so-called high-brow and low-brow aesthetics, with conventional approaches to art happily coexisting with bright, plastic, Lisa Frank-like flash.

Works are hung in a deliberate way to communicate this, with some instances being more apparent than others. On one wall, two ink drawings by Pittsburgh-based artist Eriko Hattori, It’s Britney and Close to You, play with imagery familiar to traditional Japanese art and mythology, including a half spider-half woman yōkai spirit known as Jorōgumo, to explore fetish, sexuality, and perceptions of femininity. Surrounding these works are three pop-art pieces by Lizzee Solomon, Gag Reflex, Malparido, and Ransom, spelling out various messages in bright, shiny vinyl, and two screenprints by Ellissa Schatz titled with plastic toy letters affixed to noticeably cheap frames. 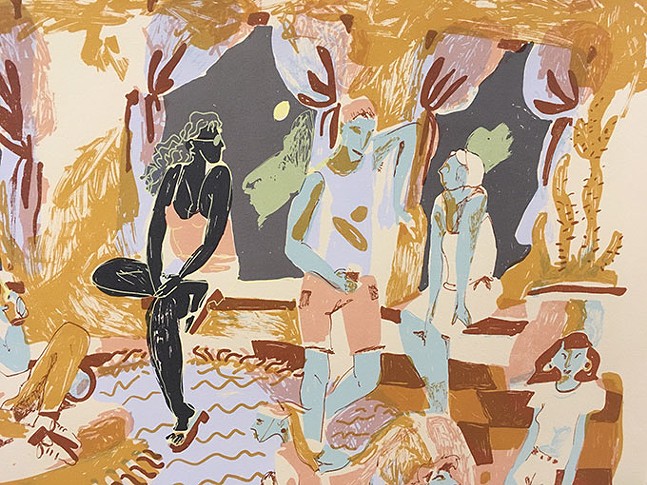 The show blossoms into a frisky cornucopia of soft sculptures, prints, paintings, and illustrations that capture the beautiful, experimental messiness of youth, where juvenile attachments bump against the sophistication of adulthood. This comes across in a trio of storybook-like illustrations, two by Lacey Hall and one by Alexandra Lakin, depicting girlhood fantasy scenes with magical rooms and friendly dogs. Illustrator Xiola Jensen (a former Pittsburgh City Paper intern) offers conflicting views of young womanhood with two small, delicate pen-and-ink portraits, The Fairest of Them All and Long Live the Kween. In The Fairest of Them All, a girl remains seated in a rigid traditional pose, much like the sweet little princess suggested in its title, while in Long Live the Kween she’s clearly more relaxed, taking a selfie in her bedroom as if to suggest that this is her true self.

In terms of style, Justine Kelley’s screenprints evoke the amateurish charm of early teen art with its neon Crayola marker scribbles and nostalgic imagery, including depictions of the comic strip character Garfield with uncharacteristically long, seductive eyelashes. Meanwhile, After Potty and Go Baby Go! by Allison DiPofi look more suited to a nursery with their clean, white frames adorned with stickers, fur, and fuzzy trim, until a closer look reveals the odd prints encased within. Even with its cute, child-like style, After Potty could be viewed as a distressing morning after a night of binge drinking. In line with this is Famous Last Words, a cheeky illustration by Lee featuring a tombstone with the engraving “I’ll Have A Double Vodka Soda.” 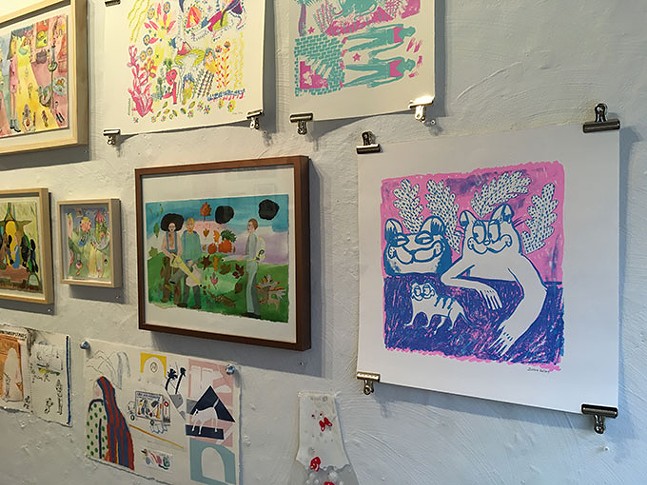 Among the most striking works are lively untitled screenprints by Asia Lae Bey, which draw the eye to various figures eating and drinking in modern-day Picasso-like scenes, one at a restaurant, the other at a house party. Also impressive is Saint Sebastian by Jacque Beas, an ink and watercolor piece that uses ultra-black lines and rich red blood droplets to re-imagine the Christian saint who survives being tied to a tree and shot through with arrows.

By putting over 50 pieces on display, Mirror, Mirror makes for an ambitious effort from PULLPROOF to, as the event description puts it, highlight "the voices of visual storytellers who are underrepresented by the art world and the world at large.” With its frills, soft textures, and blasts of hot pink, the show elevates what patriarchal culture defines as frivolous or superficial (or, feminine) by giving value, both creatively and monetarily, as most of the pieces are for sale, to the experiences of the chosen artists.