The August Wilson Center, which in 2014 came close to a permanent shut-down, seems to be recovering nicely. And it has taken the next step by selecting an experienced new leader, respected local arts programmer and administrator Janis Burley Wilson. 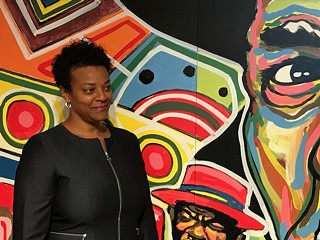 CP Photo by Bill O'Driscoll
Janis Burley Wilson stands before a mural by Tarish Pipkins at the August Wilson Center.
Wilson’s selection as president and CEO was announced this morning in a press event at the Center, located Downtown. Her hiring was praised by speakers including Wilson Center board chair Michael Polite, Pittsburgh Mayor Bill Peduto, Allegheny County Executive Rich Fitzgerald, and Pittsburgh Cultural Trust President and CEO Kevin McMahon, who for the past 16 years has been Burley Wilson’s boss.

For the past two years, ever since the Wilson Center was saved from closure, Burley Wilson has also developed and overseen programming there, including several visual-art exhibitions, the Soul Sessions concert series, and, earlier this year, the inaugural Black Bottom Film Festival.

Polite called Burley Wilson’s hiring “the next stage in the rebirth of the August Wilson Center.”

The Center opened, in 2009, in a newly constructed landmark building on Liberty Avenue. Named for the Pulitzer Prize-winning playwright who grew up just a mile or so away, in the Hill District, it was dedicated to celebrating and furthering African-American culture. The venue hosted art exhibits, theatrical productions and more, and at one point even had its own nationally recognized dance troupe.

But, troubled by inadequate fundraising as well as charges of poor community engagement, the Center was unable to meet payments on the building. In 2014, it faced bankruptcy, mortgage default and foreclosure — plans were floated to turn the building into a hotel — before local government officials and local foundations intervened, reaching a court-ordered settlement to purchase the structure.

Under the temporary management of the Cultural Trust, including Wilson's guidance, the Center has done much better, Polite said this morning. He cited the 80 “mission-oriented events” it has hosted in the past 12 months. Successes including drawing 15,000 visitors to the 2017 art exhibit Instill and Inspire. Polite said the Center is 25 percent ahead of its budget for rental revenue.

Polite said there were 50 applicants to be the Center’s president and CEO. In his remarks, Heinz Foundation President Grant Oliphant said that Burley Wilson was hired because “she was already doing the work.”

Speaking of the Center, Peduto told the crowd, “We almost lost this gem. Today we’re not talking about saving an asset, we’re talking about building on it.”

In her brief talk, Burley Wilson, a Pittsburgh native, paid tribute to August Wilson’s legacy, and acknowledged the community stakeholders who rallied to get foundations behind the Center.

Responding to questions, Burley Wilson said her immediate priority is to do a strategic plan for the Center. “We’ll have something to unveil in a couple of months,” she said.

Asked about the fundraising woes that have dogged the Center, Burley Wilson said she wants to broaden its funding pool beyond local foundations by raising the organization’s profile nationally and even internationally. (She mentioned The Andy Warhol Museum, one of Pittsburgh’s top tourist destinations, as a model in this regard.) She also intends to create an individual giving campaign.

Those hailing Burley Wilson’s hiring included Mitch Swain, executive director of the Greater Pittsburgh Arts Council. “I am thrilled that Janis Burley Wilson has been chosen,” said Swain, who has known her since his own time working at the Cultural Trust. “She’s done wonderful things programming the Center. And I think she’s exactly the person to take the Center forward.”