"They should accept the bid that wants to keep its mission intact." 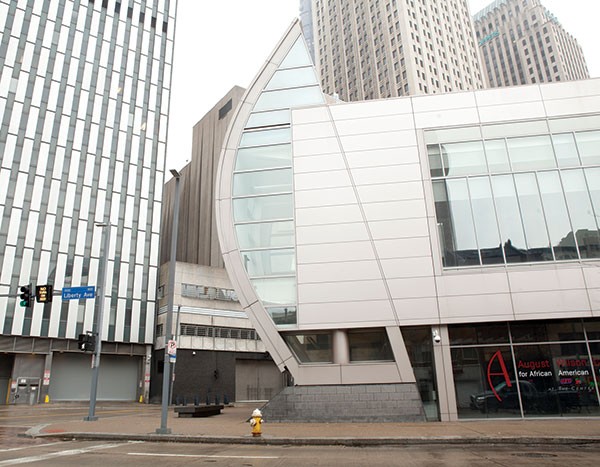 Photo by Heather Mull
The Pittsburgh Foundation has made a bid to take over the financially distressed August Wilson Center.

Supporters of the August Wilson Center for African American Culture breathed a sigh of relief last week when the Pittsburgh Foundation announced it had joined with other local foundations in a bid to purchase the ailing institution. Most importantly for advocates, the foundations say they plan to maintain the center's original mission: preserving and celebrating local black culture.

"When I heard the foundations were coming together to make a bid, I was thrilled," says Tim Stevens, chairman of the Black Political Empowerment Project. "We specifically pushed for that."

"The foundation consortium's primary objective is to explore opportunities to save the August Wilson Center in the hope that it may re-open and remain operating for the long term, fulfilling its essential role as the community's hub for African-American arts and culture," said John Ellis, Pittsburgh Foundation spokesperson, in a statement.

While the announcement is good news for those who want to see the August Wilson Center continue its focus on African-American culture, nothing is certain. The foundation wasn't the only bidder for the center, and so far, neither the number nor identities of the other bidders has been released by Judith Fitzgerald, the court-appointed conservator charged with resolving the center's debt. Also not known is what other bidders might do with the center.

"I appreciate the interest of the press and public in the status of affairs at the August Wilson Center," Fitzgerald said in a statement. "I am not ready to issue a formal announcement as my team and I are still actively working on a variety of possible solutions. When we have something final to report, I will let you know. I anticipate making an announcement in the near future."

Right now, even Dollar Bank, which holds the mortgage on the property and initiated foreclosure proceedings last September, is in the dark about who else has bid on the center.

"We communicate with the receiver and receive some information [but] I have not seen [the bids]," says Dollar Bank attorney Eric Schaffer. "I've heard about them, but I don't think I know any more than [what] the receiver has announced."

Some observers are expressing concern about the lack of transparency,

The center is burdened with nearly $10 million in debt, $7 million of which belongs to Dollar Bank. Fitzgerald declined an earlier foundation-led bid, offering $4 million for the center, because it didn't cover the amount owed. Some worry that this bid, too, could be turned down if it doesn't pay off the center's obligations — and that other, competing bids might not aim to keep the center's mission intact.

"I'm hoping the conservator and Dollar Bank will do everything they can to make that bid work," Stevens says. "Obviously Dollar Bank contributed greatly and needs to get their money back, but there is a greater calling here. The August Wilson Center was designed as the hub of African-American culture in our city and it is vital for it to remain so."

Fitzgerald has repeatedly stated her preference to sell the center to an entity that would keep its mission intact. However, if a bid does not meet the debt owed to Dollar Bank, as previously reported by City Paper, the bank can counter-bid the $7 million owed to them, says Schaffer, and potentially claim the building.