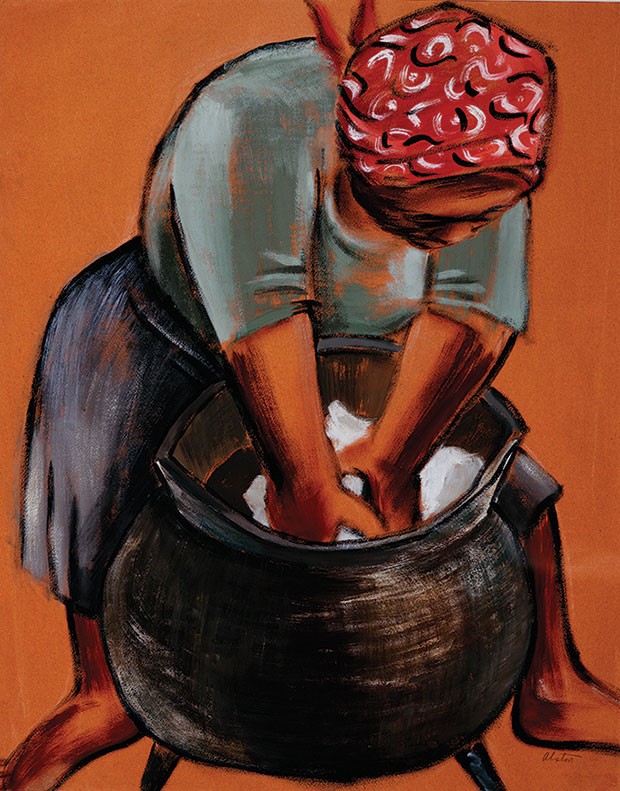 The Instill and Inspire exhibit, at the August Wilson Center, aims to do just that: motivate viewers to create and support art, and cultivate a respect for and understanding of the 20th-century African-American experience. The show centers on the collection of John and Vivian Hewitt, a couple who in 1949 began supporting African-American artists by providing a venue (their home) for artists to show their work at a time when such art was not represented in galleries. A video interview accompanying the exhibit shows Vivian Hewitt (the first black librarian at our own Carnegie Library before she moved to New York with her husband) in her art-filled home, discussing how their collection began.

The touring exhibit features 58 works by 20 artists, both well known (Romare Bearden, Jacob Lawrence, Elizabeth Catlett) and lesser known. It includes a wide variety of styles and media, and ranges from representational works to fully abstracted images. What the pieces have in common is their striking emotional effect.

An especially moving section displays portraits, which serve as an intimate and loving look into the everyday lives of African Americans. Adjacent pieces by Ernest Crichlow depict young girls in very different situations: “Girl with Flowers” portrays a child in a bright yellow dress smiling in a cheerful garden, while “Waiting” contains a stark sketch of a child’s face behind barbed wire. This juxtaposition reflects the range of emotions conveyed in the show, from the hopeful and jubilant figures of musicians in Bearden’s “Jamming at the Savoy” to the terrifying shadows of Ku Klux Klan members in Eugene Grigsby’s “No Vacancy.”

The exhibition continues a floor below with a poster gallery filled with works by Jonathan Green, who credits his success to the Hewitts’ support. His vibrant paintings, reproduced in poster form and used for fundraising and charity events, depict the Gullah culture of the South’s rice-growing low country. Green’s strokes are filled with movement, and the billowing fabrics and brightly hued grass are palpable.

The exhibition, in its three parts (the two galleries and a sofa-outfitted room showing Vivian Hewitt’s interview), is very effective both at displaying a diverse and impressive collection of work, and in highlighting the importance of African-American art and its place in the art world.