Access to good public transportation seems like an obvious component of affordable-housing planning, but history shows that it hasn’t been so far.

Here in the Pittsburgh area, there are many low-income housing projects that sit in isolated sections of the city, in blighted areas with limited bus access. (For example, Bedford Dwellings, in the Hill District, gets a bus only every 35 to 40 minutes, even during rush hour.) 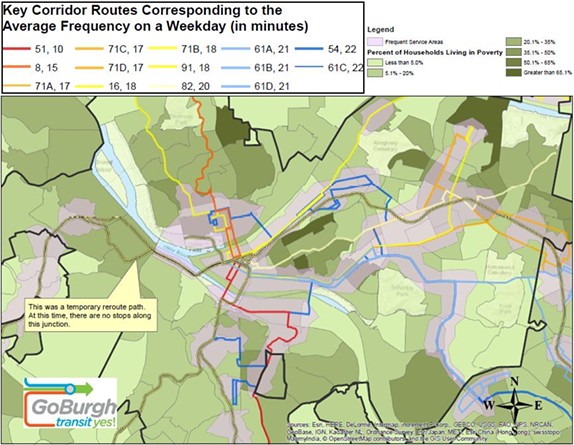 Image courtesy of PCRG
Map showing the disparity between frequent bus service routes and the region's poorest neighborhoods
In response to this ominous trend, transit advocates posed some public-transportation questions to Pittsburgh’s Affordable Housing Task Force at a May 24 panel discussion hosted by the Housing Alliance of Pennsylvania. The discussion was centered on funding issues involving the city’s proposed Affordable Housing Trust Fund and how it can raise its goal of $10 million annually.

Molly Nichols, of public-transportation advocacy group Pittsburghers for Public Transit, asked, “How can the trust fund insure that affordable housing will be built near good transit?”

Pittsburgh City Councilor and co-chair of the task force Daniel Lavelle said the yet-to-be-chosen affordable-housing advisory boards will be able to prioritize projects near transit. “We don't have this all figured out yet; all the nuances will have to be worked out down the line,” he said.

Lavelle confirmed that the tasks force’s recommendations don’t include specific language that requires new affordable housing to be near frequent public-transportation service. However, he did say that it might be possible to have a transit advocate on one of the city’s advisory boards.

Chris Sandvig, transit expert and policy director of the Pittsburgh Community Reinvestment Group, asked whether other cities similar to Pittsburgh have had success creating affordable housing near current light rail and bus lines. (The new housing development above the East Liberty Busway stop has 360 units, but all are at market rate.) Members of the task force didn’t offer any specific examples to Sandvig, but said that it can be difficult to do because real estate near transit is usually in high demand.

Both Sandvig and Nichols said the exclusion of transit requirements from the task force’s recommendations was an oversight. But Sandvig said the oversight was most likely unintentional. He said that many housing and transit advocates have only recently understood that their issues are closely linked, but that they have started to push those combined agendas.

One member of the Affordable Housing Task Force did offer a possible answer to advocates' transit questions. Nikki Lu, the policy director for SEIU Western Pa., said Wisconsin-based think tank Center on Wisconsin Strategy (COWS) recently published a report on Pittsburgh that lays out policies to help working families in the region. According to the report, “affordable housing should take into account the combined costs of the energy use and transportation needs that come with housing.” It also offers a litany of policy recommendations.

Lu applauded the questions from audience members and said that to translate their concerns into results, advocates must continue “to hold [leaders'] feet to the fire.”

According to Lavelle, the task force’s recommendations should be presented to city council sometime next week.