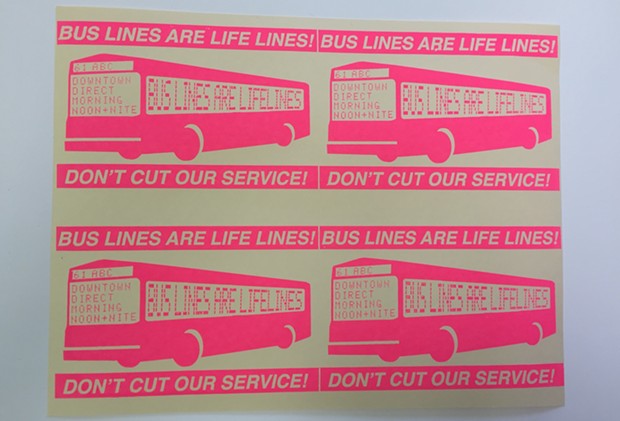 
Under current BRT proposals, the 61 routes will become feeder routes to the BRT and will stop in Oakland, instead of continuing on their usual route to Downtown. This means route-61 riders will need to transfer in Oakland to get all the way Downtown.

Advocates who attended the Dec. 19 postcard signing event in Braddock are worried the changes will lead to steep decreases in bus frequency for Mon Valley communities, as well as the potential of making route 61 riders pay for a transfer that they normally didn’t have to pay for. Nica Ross, a route 61 rider from Braddock, wrote in an email to CP that the proposed changes “would have enormous impacts on Mon Valley residents' access to food, employment, childcare, healthcare and community.”

To address these potential issues, the residents signed postcards asking the Port Authority to ensure that service reductions wont occur and transfers will be made free for route-61 riders. Ross also told CP that residents at the event said they would like to see the Port Authority consider using capital funds towards expanding the East Busway into Braddock and Monroeville, instead applying its funds to the BRT.

The Port Authority has shown a willingness to listen to these issues. In October, the authority held a couple community meetings in Mon Valley towns to listen to bus riders concerns. And the Pittsburgh Post-Gazette reported in October that “although the agency hasn’t announced a formal policy yet on the cost of transfers, Allegheny County Executive Rich Fitzgerald has said at public meetings that the transfers would be free.”

Port Authority has yet to make any final decisions on how the BRT will impact routes connecting to the Mon Valley. Port Authority spokesperson Adam Brandolph told the P-G in October that the authority is “still looking at all of the options available.”

The postcards will be delivered to Port Authority board members when they resume meeting in January 2018.