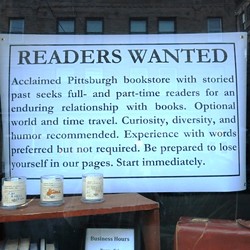 Photo by Bill O'Driscoll
One of Pittsburgh’s more venerable bookshops is being reborn, somewhat scaled-down and in a new neighborhood.

Arlan Hess, who purchased the name, inventory and some of the shelving from the South Side’s shuttered City Books, is reopening it tomorrow on the North Side.

The Galveston Avenue storefront (right next to the Modern Café) will also have a modest grand opening celebration this Saturday, during its regular hours of noon-5 p.m. (Cupcakes are promised.)

Hess, of Mount Lebanon, for years taught literature and creative writing at Washington & Jefferson College, but was ready for a change. When she saw that City Books was closing, in late 2014, after a three-decade run on East Carson Street, she “jumped at it.”

Hess says she purchased City Books’ stock – some 20,000 books – this past April from founder and owner Ed Gelblum. (Gelblum died the following month.)

Her final month teaching was May. When a plan to reopen the store in Brookline fell through, she found the Galveston Avenue space on Craigslist. And she liked Allegheny West, with its proximity to the Mexican War Streets, CCAC and City of Asylum/Pittsburgh (which actually plans to open its own bookstore in its new Alphabet City space, on North Avenue, in the near future).

Reached by phone today, Hess says that she and her husband had been working seven days a week to ready the store for tomorrow’s soft open. It might well be Pittsburgh's lone used bookstore north of the Allegheny.

The original City Books was for years a cultural anchor on the South Side. In the 1980s and '90s, it was known for hosting literary readings and live music as well as for its jam-packed two floors of books. The new City Books is rather more compact. At 600 square feet, says Hess, “It’s a little teeny pocket bookstore.” The shelves have room for about 4,000 books, she says. (The rest are in storage.)

But many customers will find the shop more user-friendly. Hess says she has reconfigured the selection, paring down Gelblum’s extensive philosophy offerings, for instance, and adding children’s and young-adult books.

Though new to the book business, she’s been studying it. She plans to revive the store’s online presence (a big part of the book trade nowadays, even for indie shops) and to host small literary readings.

City Books is located at 908 Galveston Ave. It will be open seven days a week, from 11 a.m.-6 p.m. Tuesday through Friday, and noon-5 p.m. Saturday and Sunday.