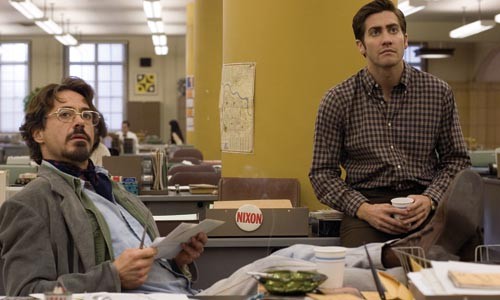 David Fincher, the director of Se7en and Fight Club, has a lot of story to tell in Zodiac, and as I sat there for two-and-a-half hours, watching him tell it, I began to wonder how he might have done it better.

Zodiac takes place in the San Francisco Bay Area, beginning in 1969, and explores a series of unsolved murders by a cagey killer who awarded himself the story's eponymous sobriquet in his cryptic, hand-written letters to media and the police. Yes, that's right: unsolved murders. And by the time the final piece of known (or knowable) evidence emerges, at the end of Fincher's film, it's 1991. Yes, that's right: 19-90-1.

So how do you tell a story that takes place over 22 years and has no ending? Methodically, and with the occasional jolt early on, when the killer is still killing. (He stops about one hour into the movie, in the early 1970s.)

Fincher knows how to make us writhe, and he demonstrates his sang-froid when Zodiac shoots one couple parked at a Lover's Lane, and then stabs another lolling blissfully by a sylvan lake. In these brief passages -- brief compared to the length of the film, I mean -- Fincher toys with us the way Zodiac toys with his victims. We're flies to him, and he pulls off our wings, one by one, before pinching us between his fingers, nice and slow.

This is good, if merciless, filmmaking, and it's the occasionally beating heart of the first 90 minutes of Zodiac, which Fincher paces briskly, somewhat like an old-fashioned thriller. But then the investigation stalls, and so, necessarily, does the film. People's lives begin to decay in frustration at not being able to catch the killer. One detective (Anthony Edwards) leaves homicide, his partner (Mark Ruffalo) grows irritable at the mention of the case, and the San Francisco Chronicle reporter Paul Avery (Robert Downey Jr.) who wrote about it becomes an alcoholic and an addict.

The key survivor, if you can call him that, is Robert Graysmith (Jake Gyllenhaal), an editorial cartoonist at the Chronicle with a knack for puzzles who grows interested in the case when Zodiac sends his newspaper (and two others) a cipher to decode. Decades later, Graysmith writes the book on which Fincher's movie is based.

This is all sturdily done, although tedious in measurable stretches. The characters are rather thin and not very compelling because, in the service of plot, there's no time for them to be anything else. And so, my solution: Fincher needed to make a slower, denser, psychological drama that lasted for three hours or so. Nobody would go see it, of course, but at least those few who did might leave feeling satisfied.

To occupy us, and perhaps himself, Fincher speckles his movie with period detail and a subtext about how police technology and popular culture have changed since the 1960s. When the movie opens, a few small police departments don't even have fax machines. Look closely and you'll see a "Flower Power" van in one background. Midway through, Graysmith says his kid would love one of those new home video games. The closing titles mention DNA testing of the prime -- now dead, and never charged -- suspect. We can only smile anachronistically at how Grissom or The Profiler would have wrapped up the case in an hour.

For a little more period effect, Zodiac opens with the soundtrack playing "Easy To Be Hard," from the '60s musical Hair, and closes with Donovan's eerily languid "Hurdy Gurdy Man." The throwback clothing and haircuts are subtle and fun, and fashion even helps Fincher chart the decay of Downey's character: At the start he's a dandy, replete with ascot, but by the end he's gaunt, filthy and dressed in torn blue jeans.

Fincher populates his cast with familiar actors, like Dermot Mulroney, Donal Logue, Elias Koteas, John Getz, Brian Cox (excellent as celebrity attorney Melvin Belli) and others, all of whom perform well, except the listless Chloë Sevigny. Only Gyllenhaal seems miscast: When the story opens, he's a rookie at the Chronicle, introverted and nerdy. But later he becomes consumed with the case, knocking on people's windows on rainy nights, and going into basements with creepy strangers.

To allow Gyllenhaal to inhabit his character's office nickname ("Retard"), Fincher at first has him mumble and slouch, walking around with his eyes cast to the ground. It's one of the worst directing choices I can remember seeing in a recent Hollywood film, and it works only to accent the usually charming young actor's limitations (so far).