“Everything you do has meaning, from the shake to the stir.” 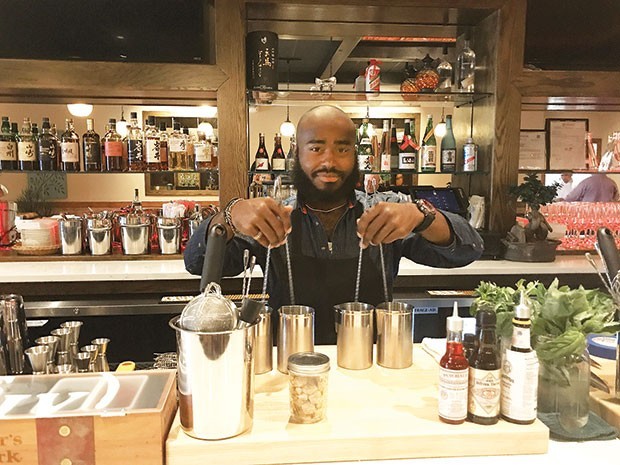 Yuzu Kitchen Ramen & Robata Grill had its soft open earlier this month and is still slowly but surely moving toward a full service that will include both a downstairs and upstairs bar. Owner Teejay Li, also of Thai Foon in Robinson, is filling Downtown’s ramen void as well as adding some Asian flair to its growing cocktail scene.

The restaurant’s namesake, the yuzu (called yuja in Korea), is a citrus fruit native to China, Japan and Korea. The food, cocktails and decor take their culinary inspiration from the same countries. Beverage director Alec El, formerly of Bar Marco, and who staged at Washington, D.C.’s lauded Columbia Room, says he plans to bring a detail-oriented style of service to both of Yuzu’s bars. Each will have a unique cocktail menu. “I’ve gotten a lot of inspiration from Japanese bartenders,” he says. “In America, craft cocktails are fun but I feel like you don’t get to experience that Japanese way [of service]. It’s very detail-oriented, more subtle. Everything you do has meaning, from the shake to the stir. It’s beautiful.”

The downstairs bar, now open, is meant to be more casual, with a sprawling 22-seat, faux-marble-topped bar and a selection of simple, cleanly crafted cocktails. Look through the mirrored cutout above to see a hint of the soon-to-open upstairs bar. It’s smaller, with an intimate, lounge-style vibe; patrons will be able to sip drinks while looking toward a soaring arched window that lets light filter in. The cocktails will be seasonally focused, based on an era, ingredient or spirit that will serve as a theme.

Yuzu also offers wine, beer, shōchū, saké and whiskey menus. Shōchū, which has the least traction in U.S. markets, is a distilled spirit that’s typically clear and made from different bases like sweet potatoes, barley, rice and even chestnuts. Education will be important to familiarize guests with their options. For example, the wine menu is accompanied by a map of France’s Loire Valley, and El plans to include more visual aids and pointers on the shōchū and saké menus to help educate guests on the spirits and make them more approachable.

“Shōchū and saké are meant to go with and complement the food,” he says, adding that his main goal is to start a conversation. Happy hour should offer a good time and monetary incentive to try new things, with $5 cocktails available. El is also excited to expand the selection of spirits, with a specific focus on shōchū, saké and whiskey — spirits popular in China, Japan and Korea. “If you can go to Japan and get high balls in cans, that’s saying something,” he says.

For now, El is putting his focus mostly on his staffers, developing and highlighting their skills behind the bar. “It’s the most important thing but it’s definitely fun, in that it’s testing my leadership and my ability to teach,” he says.