On the menu, ramen and other noodle bowls, plus stir fries and bars snacks 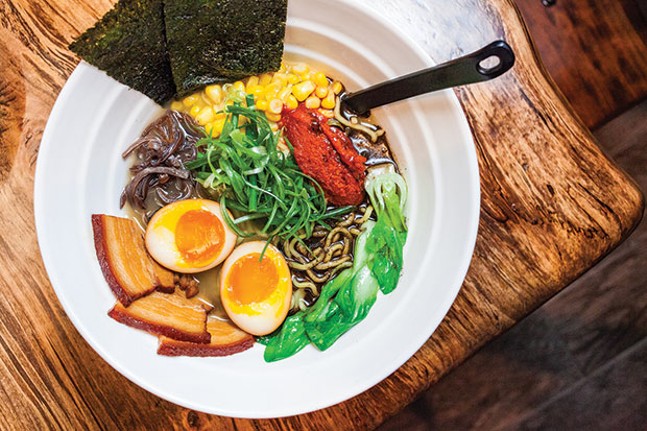 Thirty years ago, Japanese restaurants pushed the boundaries of dining out in America. Confronted with sushi, a generation to whom lasagna or chow mein constituted international cuisine found its mettle tested: The adventurous embraced it, the hidebound, not so much. Of course, today sushi is so commonplace, it’s surprising if a Chinese or Thai restaurant doesn’t offer it, let alone a Japanese place.

But though it became synonymous with Japanese cuisine in the U.S., sushi is not actually the everyday food of Japan. The country has its own cooking traditions which, while less sensational than raw fish, are just as worthy of notice. It’s been nice, lately, to see a growing appreciation and availability of Japanese cookery in Pittsburgh.

Yuzu Kitchen subtitles itself “a ramen and robata grill,” but really it’s a broader exploration of Japanese cooking, with a significant portion of the menu dedicated to Thai and Chinese flavors (the owners also run Thai Foon in Robinson). But most of the offerings are Japanese noodle and rice bowls, along with classic bar snacks like karaage, or boneless fried chicken.

The chicken was available plain or spicy, but the only actual difference was whether the smear of Japanese mayo on the plate was white — i.e., unseasoned — or pink from hot paprika. The white meat chunks were satisfyingly juicy and the crust good and crunchy, but where it should have been fairly light, it was a little too hearty at times, throwing off the flavor-texture balance.

Salt-and-pepper tofu, though, had a flawlessly light and flavorful crust, a peppery punch and perfectly cooked tofu with just the right amount of chew. Finely minced garlic, jalapeño and thin slices of crispy-fried red onion further upped the levels of tasty and textural delight. We could have eaten this dish all night.

Gyoza were both typical and a little extra, filled with pork and chicken, cabbage and leeks, adding up to richer flavor and subtler texture than most, while the ginger-soy dipping sauce delivered on the zingy first half of its name. Curry steak on a stick — actually a sugar-cane skewer — varied between tender, well-seasoned beef on one stick and chewier, if not outright tough, meat on the other. The satay-style peanut dipping sauce was distinctly thick, with clear brown-sugar notes.

The entrée menu features five varieties of ramen, each with a different house-made broth simmered for 18 hours. Each bowl comes with several pre-selected ingredients, and more can be added from the a la carte toppings menu. Angelique selected the most popular, rayu paitan, a chicken-broth base fortified with pork marrow and containing marinated pork belly, scallions, corn, shiitake mushrooms, a 30-minute egg, and the dish’s namesake, rayu, or chili oil. From the toppings list, she added baby bok choy and bean sprouts. The star of all these was undoubtedly the pork belly, whose silken texture was out of this world. The soup itself was mild and unassuming until the rayu was stirred in, creating a broth spicy enough to be its own source of heat on a cold winter night.

On the same menu page was another list headed, simply, “Not Soup.” Most of these were either mein (Chinese-inspired noodle dishes) or don (Japanese rice bowls with savory toppings). Last among these, teriyaki salmon seemed like an outlier from a Japanese steakhouse menu, but it was superior in every way to our expectation of overcooked and over-sweetened. The seared salmon was rosy and succulent, and the teriyaki sauce complex, salty-sweet and savory all at once. Steamed vegetables in garlic butter were a suitably simple, but not bland, accompaniment.

Jason had stir-fry udon from a second menu page that collected various Thai curries, Chinese stir fries, and pan-Asian noodle dishes under the heading “From the Wok.” Angelique found the brown sauce rather one-dimensional in contrast to the other dishes we’d been enjoying, but Jason wasn’t so quick to dismiss its lighter-bodied, but deeply colored, charms. Thin slices of uniformly tender beef, firm shiitake and crunchy bean sprouts rounded out the satisfying texture profile that began with thick, chewy noodles.

“Peanut noodles” were supposed to be basically pad Thai, as per our server, but it seemed like something got lost in translation. All of the components were there: firm rice noodles, crunchy sprouts, crushed peanuts, scrambled egg and ultra-tender chicken, and the flavor profile was in the ballpark. But a thick, sweet-leaning sauce made it seem more like somebody’s personal take on the iconic dish.

More than a ramen house or a robata grill, Yuzu can probably best be described as an Asian restaurant with a Japanese focus. The Japanese dishes are definitely where we’ll focus when we return.