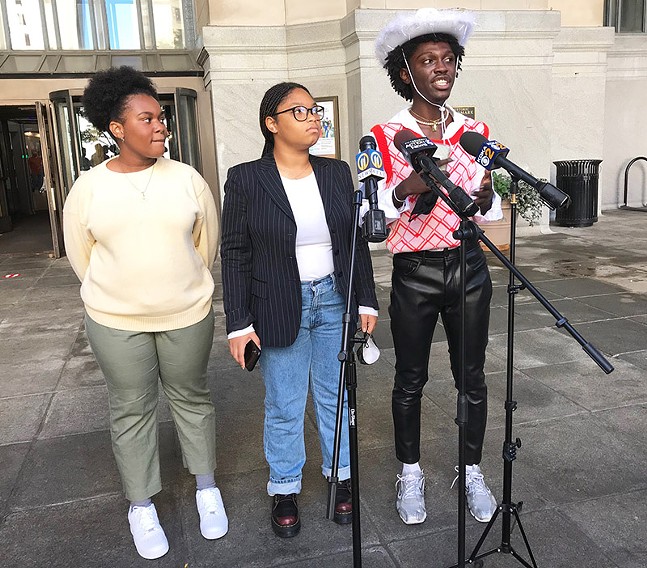 CP photo: Ryan Deto
Leaders of Black, Young, & Educated hold a press conference in front of Pittsburgh's City-County Building.
Yesterday, Pittsburgh Police criticized a group of Black Lives Matter protesters and claimed that the group was failing to communicate beforehand with police about any protest routes and other details from their ongoing marches. The communication issue was raised because Pittsburgh Police arrested a protest marshal on charges of disorderly conduct, failure to disperse, and obstructing highways, claiming the marshal's actions of breaking out of the march to ensure traffic didn’t impede or confront the about 150 marchers was startling to drivers at several intersections.

The marshal, Matthew Cartier, was arrested by rifle-wielding, plain clothes officers, and taken away in an unmarked white van, which drove off on the sidewalk, in apparent violation to the police’s own accessibility guidelines.

But today, the organizers of Saturday’s protest are pushing back on those claims. At a press conference, leaders of the group Black, Young, & Educated said that they haven’t received any attempts at communication from Pittsburgh police since seven weeks ago.

“I have not gotten any communication from the mayor, the Public Safety department, or the police, except for one email seven weeks ago,” said AD Bagheera of Black, Young, & Educated.

BYE is a youth-led organization that was started by Central Catholic High School students. The leaders admitted they are still learning a lot about organizing, since it is their first time leading something so large.

Bagheera went on to say that she believes the police’s civil affairs unit has done a poor job, and that communication is a two-way street. The civil affairs unit is responsible for working with and keeping protesters safe during marches.

BYE co-founder Treasure Palmer also defended marshals, like Cartier, who she said are a crucial part of keeping protest safe.

“Our marshals work tirelessly to protect our protesters, when the police do not,” said Palmer.

Nick Anglin, the other BYE co-founder, took issue with the police’s and the mayor’s assertion that marshals were “side groups” that have separate agendas than those marching.

“They are not a side group, they stand with us,” said Anglin.

BYE leaders said they are still opposed to sharing protest routes with police. They would be open to Pittsburgh Mayor Bill Peduto marching in their protest, and are open to some level of communication with the city, but also feel a lot of trust has been broken. Anglin said that if the mayor cannot do his job in meeting with and understanding the protest movement, he “needs to be voted out.”

“Mayor Bill Peduto has a habit of contradicting himself,” said Bagheera. “His lack of actions doesn’t back up his words.”

Yesterday, a group of a dozen protesters marched to Peduto's house, criticizing his and the police's arrest of Cartier.

Anglin said the Pittsburgh police’s tactics in arresting protesters and trying to pit protesters against each other is an attempt at “blatantly trying to silence the movement.”

BYE organizers reminded everyone that their weekly “Civil Saturdays” protests are calling for the changes to section 508 of the Pennsylvania State Code, which is the state’s use of force guidelines for police officers.

On June 1, Pittsburgh Police officers shot sponge rounds, tear gas, and pepper spray at protesters marching in East Liberty. Police arrested 22 people after that encounter, and later, all charges against the 22 protesters were dropped. Protesters are suing the police and the city for their actions on that day, and multiple investigations have been opened up into the events of that encounter. But results of those investigations, or any punishment, has yet to be announced by the city.

“Do your jobs better and maybe we wouldn’t have to be in the streets every Saturday,” said Anglin.