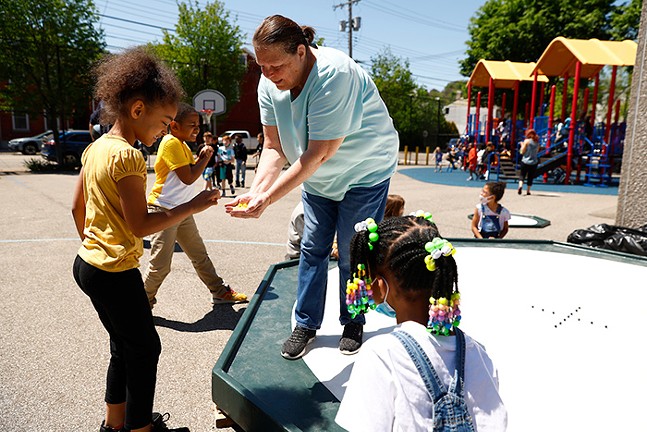 CP Photo: Jared Wickerham
Anna Marie LaGamba and Dan LaGamba teach kids how to play marbles at Phillips Elementary School in the South Side on Wed., May 11.
Last week at Phillips K-5 on Pittsburgh’s South Side, intrepid young mibsters approached a raised circular platform with fistfuls of marbles. They crouched down to examine the marbles scattered within the ring, looking for which ones might be easiest to knock out of the circle. They compared shooters, the marbles used to push the other marbles around, admiring their different colors and sizes, getting ready for that day’s installment of the tournament.

It’s not spring in Allegheny County until the mibsters, or marbles players, appear. Allegheny County is a “marbles hotbed,” boasting an almost 50-year-old annual marbles program for kids 14 and under with a many-generation family legacy that goes along with it.

"Around here, brothers teach brothers, cousins teach cousins, and, when they get old enough, they teach their kids," says Ed Ricci, whose grandfather, Walt Lease, started the marbles program in the 1950s at Pittsburgh Citiparks. "He was a math teacher who played pool. He applied the physics of pool to marbles and came up with some of the styles of shooting we have today."

Beginning late March or early April each year, Allegheny County schedules week-long marbles tournaments all over the region, where kids aged 14 and under get to learn the game and compete for a spot in the county championship, which will take place from Thu., May 19 to Sat., May 21 in the courtyard of the Allegheny County Courthouse. 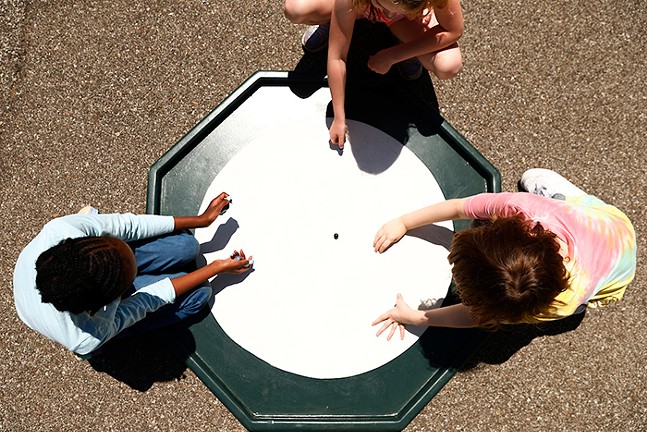 CP Photo: Jared Wickerham
Anna Marie LaGamba and Dan LaGamba teach kids how to play marbles at Phillips Elementary School in the South Side on Wed., May 11.
"I've been shooting marbles all of my life," Ricci says. "My grandfather ran the city league in the ’50s, ’60s, and ’70s, so I grew up with marbles."

Lease passed on his love of the game to each subsequent generation of his family, and he and his family have brought marbles to hundreds of kids in Allegheny County. Ed’s daughter, Amber Ricci, was the National Marble Tournament champion in 2008 at age 12. Their younger daughter, Sierra, won at nationals in 2017. Ed met his wife, Maureen Ricci, who does most of the organizing for the county marble programs, at the national competition in Wildwood, N.J., and his older sister, Denise Ricci, was the national runner-up in 1978.

Some of the Riccis’ marbles memorabilia includes the gauge Walt used to measure marbles and The Great American Marble Book, published in 1973 and held together by duct tape, we well as records of the national marble champions since 1922.

In 1974, Citiparks had to cut the marbles program for budget reasons, according to the Pittsburgh Post-Gazette, and Lease was savvy enough to ask the county to take the program off the city’s hands. The county then hired his daughter and Ed’s mother, Caroline Lease (now Ricci), to run the program.

Allegheny County’s marbles program has produced 33 national champions since the tournament started in 1922, according to TribLive, and 14 since 2004. The Associated Press reports that Allegheny County is home to more national marbles champions than any other part of the country. 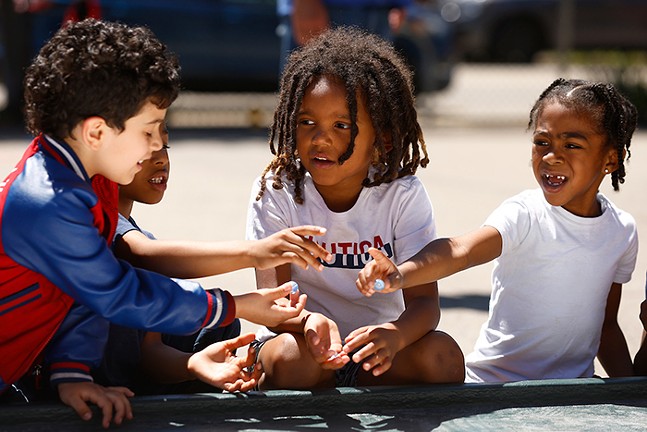 CP Photo: Jared Wickerham
Anna Marie LaGamba and Dan LaGamba teach kids how to play marbles at Phillips Elementary School in the South Side on Wed., May 11.
But why Allegheny County has produced so many national marbles champions, no one really knows. Anne Madarasz, chief historian and director of the Western Pennsylvania Sports Museum at the Senator John Heinz History Center, compares Pittsburgh’s national success in marbles to other sports in which Pittsburgh teams habitually thrive, such as football and ice hockey.

Ricci attributes some of the program’s success in the county to strong support from the parks department and Allegheny County Executive Rich Fitzgerald.

“We're lucky to have the sponsor that we have with the county parks and Rich Fitzgerald. A lot of areas don't have that kind of support,” Ricci says. “It gives us a little bit of an advantage.”

The marbles program is also free for participants, and all local winners from the county competition will head to the 99th National Marbles Tournament in Wildwood in June, with the winner taking home a $2,000 college scholarship, a marble watch, trophy, and plaque. Along with serious bragging rights.
Allegheny County Marbles Tournament.
Times vary. Thu., May 19-Sat., May 21. Allegheny County Courthouse Courtyard. 436 Grant St., Downtown. tinyurl.com/ACMarbles 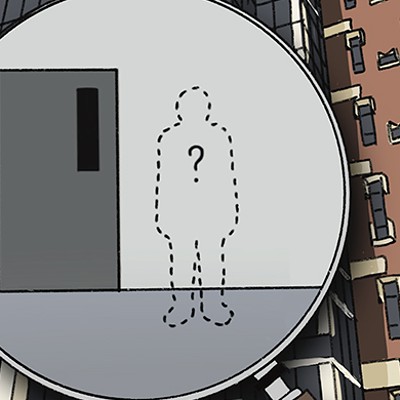