"I was that little girl that had to stay after class and erase everything that I drew on the desk." 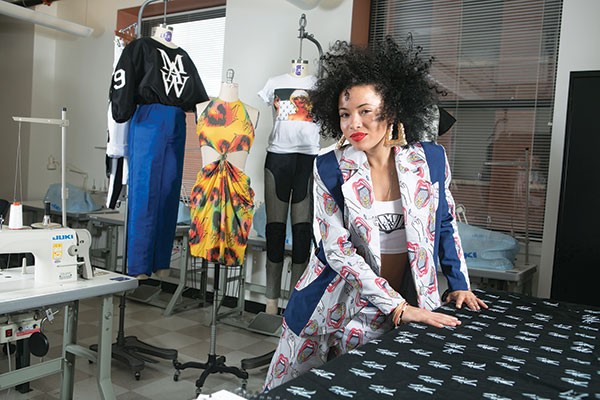 Photo by John Colombo
Makayla Wray and some of the clothing she's designed at the sewing lab in the Art Institute of Pittsburgh, where she is a student.

Energetic, fun, loud, determined: Those are just a few ways to describe Makayla Wray. Last year, two years out of Perry High School, the Sheraden native launched her own fashion label, M.A.W., and today she's one of Pittsburgh's notable young designers. In the halls of the Art Institute of Pittsburgh, where Wray is in her senior year, video monitors screen stills from a student-driven fashion show where Wray showcased her line.

"When you push your things out on the runway, you can hear the crowd, like, ‘Ooh, ahh,'" she says, excitement gleaming in her eyes. "Meanwhile, I'm in the back, like, ‘Oh my gosh, this is crazy, I can't believe this is happening!'"

Wray, colorful and risk-taking, is known not only for her charisma, but for her extensive use of custom-printed fabrics in her clothes for women and men; brand-savvy, she often incorporates her logo, consisting of her own overlapping initials, into designs. Wray's approach impressed Desiree Parker, founder of local design outfit Laced Apparel, whose 2012 showcase featured Wray's work.

"She really utilized a lot of her own textiles that she designed herself," Parker says. "She mixed in a lot of her street-wear looks with her more couture looks. She had very detailed jackets that she made, and you could just tell that there was so much work and detail that she put into her pieces. It's all very methodical and planned out."

M.A.W is among a dozen local designers featured at Laced Apparel's The Show, on July 14.

Wray's career path hasn't been smooth. At Perry, she was frustrated by what she calls a lack of support for art. She acted out in class and ended up in Clayton Academy, for troubled students.

"We had to wear these hideous uniforms. I was already sewing at this time, and I was, like, taking crewnecks and making them into little cropped tops," she says, laughing.

"I think my attitude has a lot to do with what I design," she adds, wearing bright red lipstick and door-knocker earrings that brush her shoulders. "I was that little girl that had to stay after class and erase everything that I drew on the desk. It was horrible. I was like, ‘I just wanna be me!'"

Back at Perry for her senior year — she was eventually named Best Dressed and Most Unique — Wray had a new art teacher who helped her present at The Andy Warhol Museum's Youth Invasion. "I made a Marilyn Monroe portrait out of duct tape, 'cause you could only use random materials," Wray explains. But one night someone destroyed it, so Wray improvised. "I had to make the dress out of the only thing that we had in my house at the time, which was trash bags. So, I literally duct-taped my best friend and made a big ol' fluffy dress. We're at the fashion show and people are like, ‘This is amazing, how long did it take?'

"I just said, ‘Some time...,'" she says, laughing. "It literally took like five minutes. The rest of the day we just spent cutting her out of the dress."

Wray also made her own prom dress, a project she calls her "eye-opener" career-wise. Though she attempted to incorporate her favorite designers' work into her own style, she couldn't afford some higher-end brands, so she'd remake items from thrift stores.

"I was literally taking fabric, holding it up to myself, and being like, ‘I think this looks correct,'" she says. "Cut, cut, cut and then continue."

Wray is always seeking opportunities to present herself and M.A.W. Last year, she acted in Formula 412's music video "Hold Up." She also appeared in, and was hired as an assistant stylist, for the video to Wiz Khalifa's hit single, "Work Hard, Play Hard."

"I'm in the video with my mouth wide open, probably laughing," she says.

But fashion shows remain her primary outlet. Two years ago, she volunteered with Pittsburgh Fashion Week. Last year she modeled at the event, and for this September's event, she will try out for a chance to present her own line. She's also presented her line at events hosted by Obvious and RAW Artists.

For a show last summer, around her birthday, she says, "I was at the studio till 12 o'clock sewing, and I started getting text messages like ‘Happy birthday' and I'm just like, ‘Yeah ...' and continued sewing. You get lost in that world when you're dedicated to it. That's when people are like, ‘You really didn't do nothing for your birthday?' I'm like, ‘I made a dress on my birthday, girl, what're you talkin' 'bout? You just seen it on the runway, it got a good response, and I sold it to that lady in the audience. So call it what you want!'"

At Home With: Dani Kramer

By Hannah Lynn and Abbie Adams

At Home With: John Schalcosky of The Odd, Mysterious & Fascinating History of Pittsburgh

At Home With: Dani Kramer

By Hannah Lynn and Abbie Adams

At Home With: John Schalcosky of The Odd, Mysterious & Fascinating History of Pittsburgh